Breakthrough Technology Is Good For Fracking — And The Environment 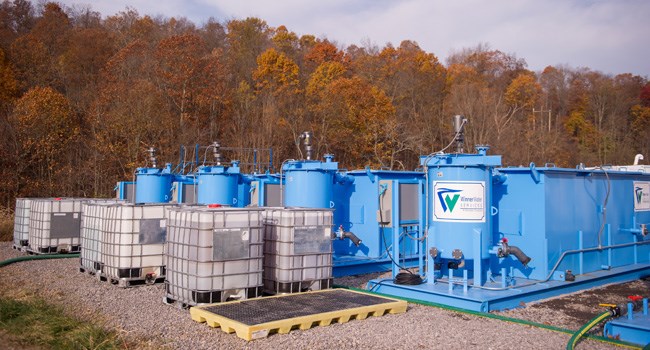 The Department of Energy (DOE) is funding a demonstration project that remediates acid mine drainage water, providing both source water and useful byproducts for hydraulic fracturing operations.

The world knows all about fracking due to the controversy surrounding it, as the country’s energy needs are pitted against potential environmental damage. Less known, however, is the problem of acid mine drainage (AMD), which the U.S. EPA identifies as “the main pollutant of surface water in the mid-Atlantic region.” These are two big and distinct issues, but there may be a shared solution.

A new technology, developed by Battelle Memorial Institute and its subsidiary Winner Water Services, can clean AMD water to levels suitable for industrial use, especially suited for hydraulic fracturing (aka “fracking”) operations. Using remediated AMD water for fracking is not only better for the environment, protecting both the quality and quantity of freshwater, it makes for better process water as well. Winner’s AMD treatment technique removes iron and sulfate from the AMD water and produces a metal sulfate byproduct that can be combined with other chemicals, water, and sand to break up shale deposits. Such formulas, or “cocktails” as described by Carolyn Guju Kotsol, president and CEO of Winner Water Services, are proprietary and closely guarded by oil and gas companies.

“We know they’re using some level of metal sulfates — boric sulfate or iron sulfate, for example — to some degree of quality, concentration, and volume,” reports Kotsol. “What we hope to do with this award is quantify and qualify what it is that we have and then exercise that with the oil and gas community and see if it fits their needs.”

The DOE grant of $900,000 was awarded through the National Energy Technology Laboratory (NETL) and is being used to fund a full-scale, 100-GPM demonstration project in Sarver, PA. Pennsylvania is a logical locale due to the abundance of abandoned mines and fracking sites (from Marcellus Shale), and it also happens to be the home of Winner Water Services. Following eight years of laboratory and bench-scale development, the HydroFlex treatment process is now being tested on an actual abandoned mine, Fawn Mine #91, which was closed in the early 1980s and is owned by ArcelorMittal Pristine Resources. Ribbon-cutting for the project, which will continue through 2015, took place on Oct. 28.

“A big part of this is that the DOE wants us to validate this technology for commercial readiness,” said Kotsol, who spoke at the event. “It’s very hard to do early on, at a lab scale; you’ve got to be far enough along where your technologists and your engineers feel very comfortable and they have proven results at a certain scale, that the technology is ready to be deployed on a commercial level.” 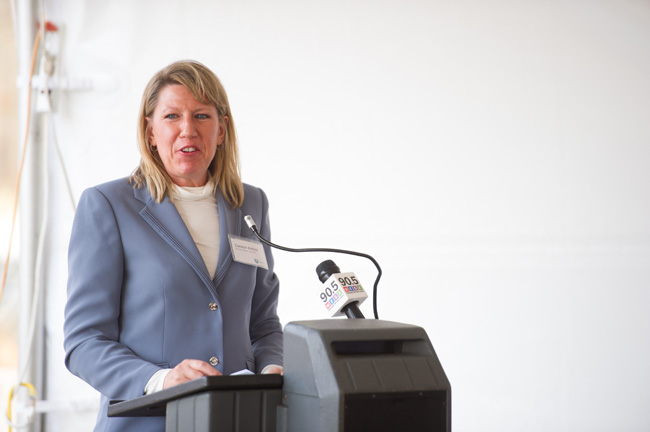 HydroFlex is a stand-alone, closed-loop process that strips the sulfate and iron out of raw AMD water via liquid-liquid separation.

“The process incorporates ionic attraction and a hydrocarbon blend of materials that we call an extractant,” explained Kotsol. “We interact the extractant directly with the AMD water and the ions proceed to exchange. The sulfate ions, the iron ions, even other metal ions that exist in the AMD water are exchanged with this extractant when we do the liquid-liquid contact. The extractant, or oil, goes one way and the treated water goes another way.”

Kotsol described the separation process as similar to that of oil and water in salad dressing: “When you put them together in the bottle and you mix them up, you see that they do mix and they do contact, but eventually they separate out.” The difference here, besides the obvious, is that Winner is using 1,400-gallon vessels with a mixer in each to promote good contact and optimal separation. Thus far, according to Kotsol, the units at Fawn Mine are removing 80 to 85 percent of sulfate (from 700 to 100 ppm) and nearly all iron (down to 2 ppm) from AMD water.

Liquid-liquid separation is nothing new, but Kotsol noted that the base chemistry and process — how it’s done — makes HydroFlex “first-of-its-kind.” 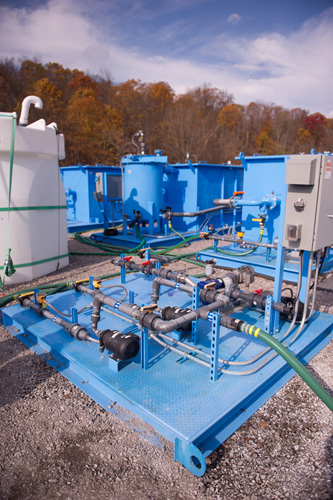 Winner Water Services uses state-of-the art technology to treat heavy metal-laden mine runoff so it can be used in oil and gas operations.

The business model for Winner Water Services is to clean AMD water with the HydroFlex system and sell it to fracking companies. Therefore, treatment costs must be below municipal purchase rates. Another option is for companies to purchase a system to create their own water source, but Kotsol sees that as less likely — at least for now. The current demonstration will provide the necessary data to inform operational best practices and the road to commercialization going forward.

If proven successful, the technology will have major implications for Pennsylvania, West Virginia, and Ohio, where AMD is common, as well as for mining territories in the water-scarce West, such as Colorado. In all of these states — and any region where AMD and fracking coincide — this new technology could simultaneously benefit fracking operations and the environment, and you don’t often hear that.