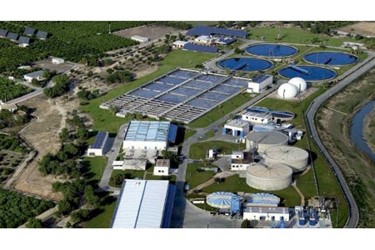 Researchers ​have developed ​a methodology ​that allows to ​recover around ​30-40% of the ​phosphorus from ​the Wastewater ​Treatment Plant ​(WWTP), thanks ​to a new ​configuration ​of the sludge ​line that ​allows to ​extract and ​separate ​phosphorus ​prior to ​anaerobic ​digestion. ​

The ​methodology was ​developed ​at IIAMA-UPV (Institute of ​Water and ​Environmental ​Engineering of ​the Universitat ​Politè​cnica de ​València)​.

This ​methodology is ​the result of ​the work that ​is being ​developed in ​the European ​project LIFE ​ENRICH (​Enhanced ​Nitrogen and ​Phosphorus ​Recovery from ​Wastewater and ​Integration in ​the Value Chain)​, and that ​seeks to ​contribute to ​the circular ​economy through ​the recovery of ​nutrients from ​the WWTP and ​its Subsequent ​recovery in ​agriculture. ​

The research - ​which is being ​developed in ​the WWTP of ​Murcia-Este - ​has its ​starting point ​in that in the ​agricultural ​sector, ​phosphorus and ​nitrogen are ​the main ​nutrients used ​as fertilizers. ​However, ​nitrogen ​production has ​a negative ​impact on the ​environment due ​to its high ​energy ​consumption, ​while ​phosphorus is ​considered a ​non-renewable ​natural ​resource, which ​could be scarce ​in the future ​if current ​exploitation ​levels are ​maintained. ​

IIAMA work area
The work ​carried out by ​the members of ​the Water and ​Environment ​Engineering ​Institute (​IIAMA) is based ​on the proposed ​modification of ​the sludge line ​of the Murcia-​Este WWTP, ​supervision of ​the works and ​decision-making ​during the ​operation of ​the new ​configuration ​of the sludge ​line , as ​explained by ​the deputy ​director of the ​IIAMA and ​principal ​investigator by ​the UPV, ​Ramón ​Barat. ​

"During the ​biological ​process of ​wastewater ​treatment, ​bacteria ​develop, known ​as PAO bacteria , which ​eliminate large ​amounts of ​phosphorus by ​accumulating it ​intracellularly.​ Subsequently, ​during the ​process of ​stabilization ​of the sludge, ​produced mainly ​by anaerobic ​means, the ​phosphorus ​contained in ​the PAO ​bacteria is ​released into ​the environment,​ triggering ​important ​precipitation ​problems in the ​digesters, ​pipes, pumps ​and dehydration ​equipment of ​the sludge. ​consequently, ​increase in the ​costs of sludge ​management, "​says Dr. Barat. ​

With the new ​method ​developed by ​the researchers ​of the ​CALAGUA group, it will be ​possible to ​recover around ​30-40 of the ​phosphorus ​coming from the ​mud line ​ , since a ​stream with a ​high percentage ​of soluble ​phosphorus will ​be generated ​that will be ​precipitated in ​a reactor ​

"With the ​traditional ​method of ​recovery of ​phosphorus ​after anaerobic ​digestion, less ​than 15% was ​recovered, as ​opposed to this ​new technique ​that allows ​having around ​30-40% of the ​phosphorus ​present in the ​wastewater", ​highlights ​Professor Barat.​

To develop ​this methodology,​ the CALAGUA ​researchers ​have studied ​the process at ​the simulation ​level, have ​calibrated the ​BNMR1 ​mathematical ​model in the ​Murcia-East ​EDAR and have ​analyzed ​different ​alternatives in ​sludge ​management. In ​fact, o ​ nce this work ​has been ​carried out, ​the most ​optimal ​alternative ​that will be ​implemented on ​a real scale in ​the WWTP of ​Murcia-Este has ​been selected, ​ in which the ​IIAMA members ​will monitor ​and supervise ​the process. ​

Partners of ​the LIFE ENRICH ​Project
The LIFE ENRICH project - started in ​September 2017 ​and lasting ​three and a ​half years, is ​coordinated by ​Irene Mozo, ​Project Manager ​of Cetaqua, and ​the Agri-Food ​Research and ​Technology ​Institute (IRTA)​, responsible ​for the ​agronomic tests;​ Aquatec-SUEZ ​Advanced ​Solutions , ​responsible for ​the definition ​of the business ​model; the ​community of ​irrigators ​Aigües del ​Segarra ​Garrigues (ASG) ​, as the final ​user of the ​products; the ​Municipal Water ​and Sanitation ​Company of ​Murcia (EMUASA) ​, responsible ​for the ​operation of ​the pilot, the ​Universitat ​Politè​cnica de ​Catalunya (UPC) ​as experts in ​the recovery of ​nitrogen and ​Universitat ​Politè​cnica de ​València ​(UPV) , as ​experts in ​phosphorus ​recovery. ​