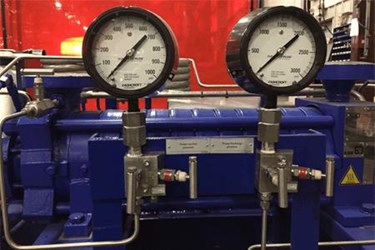 Anyone remember the old cars of the 1950’s and 1960’s? They all pretty much came equipped with an ammeter, an oil pressure gauge, a water temperature gauge as well as a speedometer and a fuel level gauge. Then came the 70’s, 80’s, even the 90’s and turn of the century cars, where “idiot lights” replaced the ammeter, oil pressure and water temperature gauges. Now the latest up-to-date vehicles have again returned to certain analog gauges, and digital read-outs, as well as computerized “information centers” that tell the operator more than they possibly ever wanted to know about their vehicle.

So it has been with power generation boiler feed water pumping units. Feed Water pump skids would always ship with pressure gauges for pump suction, discharge, and take-off nozzles, thermometers as well as RTD’s for bearing and oil sump temperature, flow indicators for cooling water and oil supply on forced oil skids, connections for vibration magnetic base hookups, “buttons” glued to the bearing housings, etc.