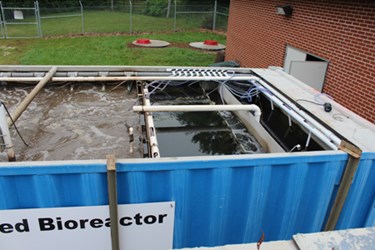 Baffled Bioreactor R&D
The baffled bioreactor (BBR) technology has developed since 2008 through multiple projects in partnership with the U.S. Army. During the Iraq War, the U.S. Army deployed different wastewater treatment technologies for military bases overseas. However, the majority of those technologies failed to work properly, mainly because of their high O&M needs — the U.S. Army is interested in simple solutions for wastewater treatment. The treated effluent needs to be safely discharged to the environment (to avoid wastewater hauling cost and improve the base environment and soldiers’ health). With clean, treated water, there is also the probability of beneficial reuse, which reduces the freshwater needs from off-base sources and related monetary/human costs. In addition, the mobility and the energy use of the treatment system are significant considerations for the U.S. Army due to the nature of the application — military bases are usually temporary, and low energy use is critical to reduce fuel delivery convoys to the base.

Frontier Environmental Technology (Frontier) has answered those Army requirements by developing an easy-to-use and high-energy-efficiency BBR technology. In principle, the BBR technology is an extended aeration process. However, with the special arrangement of baffles within the reactor, its operation is much simplified and its performance greatly enhanced compared to other available technologies. The entire process function is driven by air. The U.S. Army has invested $2.3 million on the BBR development in the last several years. The reactor developed in the most recent project has been successfully demonstrated in the Naval Surface Warfare Center-Carderock (Maryland), Contingency Basing Integration Technology Evaluation Center (CBITEC) at Fort Leonard Wood (Missouri), Fort Devens (Massachusetts), and Fort Bliss (Texas). Small communities can take advantage of this BBR technology, originally developed to meet future military needs, to conduct advanced wastewater treatment at a cost lower than the wastewater bill paid by city residents where centralized treatment plants are employed.

BBR Technology Description
The BBR technology has been extensively tested and demonstrated in Missouri since 2008 at pilot- and full-scales. One deployable BBR (dBBR), constructed using a 20’ standard shipping container, has the capacity to treat up to 15,000 GPD of municipal wastewater, equivalent to wastewater from 40 to 50 homes. This capacity is about 30 percent greater than a membrane bioreactor (MBR) unit that is constructed using the same 20’ shipping container. This is because the MBR uses a larger space to house complex equipment and controls, while the BBR only needs a small space to house two blowers (one regular and one small) and a small control box. As a result, the BBR allows significantly more volume for wastewater processing.

Figure 1. Process schematic of the BBR

Using a BBR can save more than 85 percent of the O&M cost. The cost savings is mostly from its high operational reliability, low maintenance needs, low power use, and no chemical additions.

It employs a group of uniquely arranged baffles that separate the unit into several functional zones: an anoxic zone for denitrification, an aerobic zone for organic matter oxidation and nitrification, an internal settler for concentrating and returning biomass, and a final polishing clarifier for removing solids carried out of the internal settler. The newest version of the BBR unit requires only one influent pump, two blowers, and one timer-controlled solenoid valve to be functional. Due to the very high biomass concentration it can maintain (6,000 to 8,000 mg/L), it is very compact (thus it has low construction cost for the same treatment requirement). In addition, due to the elimination of most mechanical moving parts used by other technologies, the O&M needs are very minimal, and mechanical energy-wasting was eliminated. The electricity use rate is 3 to 5 watt-hours per gallon (Wh/gal), equivalent to a $10 to $15 electricity bill per person for an entire year. This energy use rate is within the range of that for large, centralized treatment plants, but is only a fraction of that used by other small packaged plants. The total maintenance labor is less than two hours per month. Furthermore, there is no chemical use for the BBR technology, although it can achieve significant denitrification. 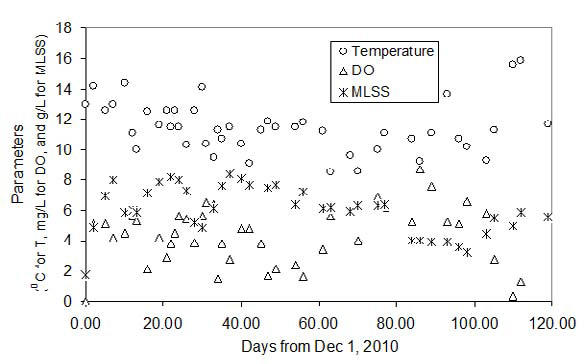 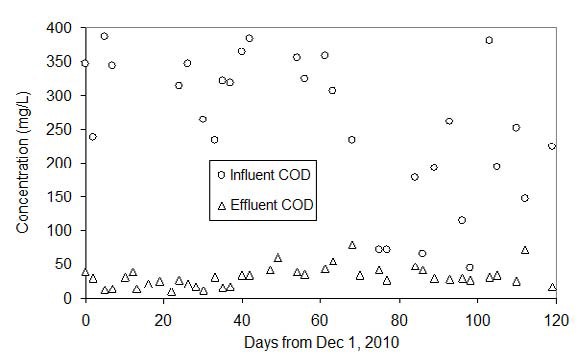 The BBR is very simple to set up. Once the site is prepared (requiring a wet well, a leveled foundation to support the treatment unit, and a power outlet), one only needs to connect the pipes of BBR influent, effluent, and drain to appropriate locations and connect power. The entire process takes less than 4 hours. The startup process is also simple. After installation, the unit needs to be turned on as if it is in normal operation, without using any seeding sludge. This natural startup option allows the BBR to be deployed in remote locations and military bases where seeding sludge is not readily available. It will take one to two days to allow the effluent to meet the federal secondary effluent standard. More time, up to a month, is needed to achieve complete nitrification, depending on the temperature of the water. However, if there is seeding sludge available nearby, using the seeding sludge will enable the BBR to perform complete nitrification within a day.

Another feature of the BBR is sleeping mode operation. Where there is no influent, or when the influent load is low, the equipment automatically switches to a sleeping mode, which uses only 200 watts of energy to maintain the activity of the activated sludge. This feature also allows the BBR to handle large flow and quality variations of the influent. A recent test also indicated that the BBR can be recovered very quickly after loss of power for 4 hours without compromising the effluent quality. Moreover, the BBR can handle the shock load very well. Doubling the influent load for a day will not impact the effluent quality. All these features make the BBR technology unique for small-flow wastewater treatment, especially for applications in remote communities and military bases where power supply is often interrupted.

Testing Data
One 20’ BBR was continuously operated for over a year, from May 2010 to May 2011, using the raw influent from the Rolla Southeast Wastewater Treatment Plant as the feed. The operation and performance data from the four coldest months, from December 2010 to March 2011, which represent the least favorable conditions, are presented here.

Figure 2 shows temperature, dissolved oxygen (DO), and mixed liquor suspended solids (MLSS) profiles. The average reactor temperature during these four months was 11.5°C, with the lowest temperature of 8.5°C. The average DO was 4.5 mg/L, typical for winter operations. The average MLSS was 6,000 mg/L during this period, which is significantly greater than that of conventional activated sludge plants. This high MLSS resulted in more stable operation of the treatment system, even with a significant fluctuation in the operating DO and temperature. Figure 3 shows the influent and effluent chemical oxygen demand (COD) concentration. The average influent and effluent COD concentrations were 321 mg/L and 32 mg/L, respectively, giving the BBR 90 percent COD removal. Effluent COD is generally three to five times that of biological oxygen demand (BOD5); therefore, the estimated effluent BOD5 was less than 10 mg/L. 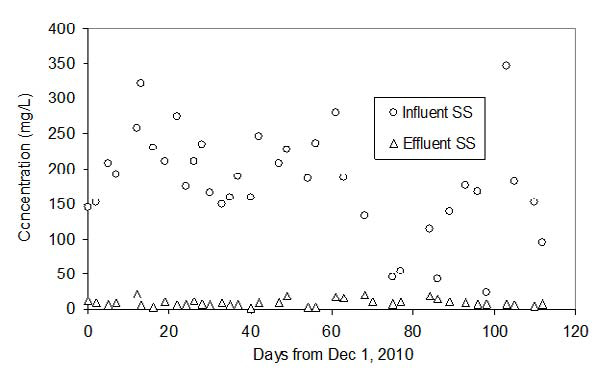 As indicated in Figures 2 through 5, at a flow rate of 15,000 GPD, both the average effluent BOD5 and TSS were less than 10 mg/L, and the average effluent ammonia-nitrogen was 0.5 mg/L, meeting future U.S. EPA regulatory needs. The effluent TN is 15 mg/L without any external carbon addition. These data results show that the 20’ BBR performed consistently well, regardless of influent strength variations, and even under very low winter temperatures. The effluent BOD5, TSS, and ammonia-nitrogen is consistently better than EPA’s future permit standards. In addition, very little attention was given to maintaining the reactor during the entire experimental process, further demonstrating the robustness of BBR technology. Basically, as soon as the BBR was set up, there was essentially only minimal additional work to do with the BBR. It will operate itself.

Note that since 2011 the BBR has been optimized with improved design. The new version performs better than the aforementioned testing version based on testing data — especially the TN removal. However, because this new version has not been continually operated for an entire year, the data were not presented here.

Cost Comparison
The overall construction cost to install a community version 20’ BBR, including a fully functional BBR, delivery, installation, site work, engineering, permit application, and other minor costs, is expected to be $200,000 to $220,000, which is approximately $15/ GPD of capacity. Figure 6 shows the construction cost comparison for the BBR versus other technologies used by small communities. Using a BBR can save up to 60 percent of the overall construction cost. The major cost savings is from the fabrication of the BBR unit, which uses very minimal equipment and controls, and the ease of installation. It is basically a plug-and-play system, as long as the site is leveled and there is power and a wet well nearby. 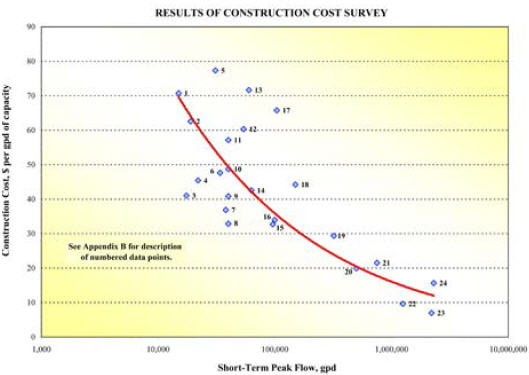 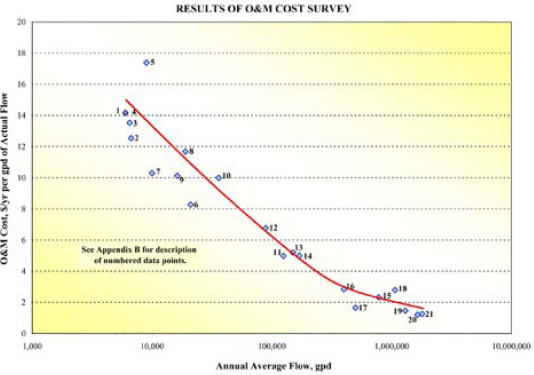 The operational cost is mainly composed of equipment depreciation, power consumption, and maintenance. Based on current testing, the total power and labor cost is expected to be $2/1,000 gals. If the equipment depreciation and sludge hauling is included (assuming 15 years), the total treatment cost is $5/1,000 gals, which is within the range that city residents pay for their wastewater bills where centralized treatment plants are available. This overall treatment cost is equivalent to an annual cost of $1.6/GPD capacity. Figure 7 shows the O&M cost comparison between the BBR and other technologies used by small communities. Using a BBR can save more than 85 percent of the O&M cost. The cost savings is mostly from its high operational reliability, low maintenance needs, low power use, and no chemical additions.

Conclusions
Extensive data from pilot and full-scale experiments have demonstrated that the BBR technology has a very low construction cost and minimal operational costs and can provide advanced treatment quality including complete nitrification and significant total nitrogen removal. It is also very easy to set up, simple and reliable to operate, energy-efficient, and resistant to low-temperature shock-loading effects. Therefore, the BBR technology is a practical solution for small community wastewater treatment and reclamation.

Dr. Jianmin Wang, PhD, PE, is an associate professor of environmental engineering at Missouri University of Science and Technology and cofounder of Frontier Environmental Technology, LLC. His research interests include sustainable technologies for advanced wastewater treatment, synergistic toxic effect of nanoparticles and heavy metals, and the fate and transport of heavy metals in natural and engineered systems. Email: wangjia@mst.edu

Dr. Guoqiang Liu, PhD, is an associate professor at Jinan University since August 2015. He was a senior research engineer for Frontier Environmental Technology from January 2013 to May 2015, working on wastewater treatment and reuse. Before that, he was a graduate research and teaching assistant at Missouri University of Science and Technology from September 2008 to December 2012.

Dr. Robert Tucker, PhD, is an adjunct professor of civil, architectural, and environmental engineering at Missouri University of Science and Technology. He is a three-time presenter for the Army Science Conference and was Chief of Environmental Programs for Afghanistan Theater in 2010 and Chief of Environmental Branch for the Balkans in 2003-04. He also serves as the Senior Applications Engineer for Frontier Environmental Technology since March 2015. Email: support@FrontierET.com.