Are EPA Mandates Overburdening The States?

A new report by the U.S. Chamber of Commerce blasts the U.S. EPA and the Executive Branch for imposing environmental mandates without giving voice or financial consideration to the states’ plight.

The Growing Burden of Unfunded Mandates on the States explains how “the state role is now less partner and more pawn” when it comes to environmental rulemaking, and lays out recommendations on how Congress can restore balance to the one-sided relationship between the EPA and the states.

The Chamber laments that the “cooperative federalism” of yore (the ’70s through the ’90s), when the states and federal government were working partners in environmental protection, has since morphed into a “coercive federalism” whereby states are given little to no say, assistance, or recourse as regulations and financial burdens are heaped upon them.

In considering the source, it should be noted that while the U.S. Chamber of Commerce might give the impression of a government agency — not through intent, mind you, but based on its name and the visage of its stately headquarters in Washington, D.C. — it is, in fact, a business-oriented lobbying group. By nature, every lobbying group has its own agenda, but the Chamber’s report highlights some interesting statistics and trends with respect to how mandates have been issued in recent years, providing a viewpoint and suggestions worthy of attention.

Evidence Of A Broken System

The apex of frustration for Chamber members, as well as scores of others, may have been the “three extraordinarily complex and costly new regulations” issued in 2015 — the Waters of the U.S. Rule (renamed the Clean Water Rule), the Clean Power Plan, and a revised National Ambient Air Quality Standard (NAAQS) — all in the span of just six months. Additionally, the Clean Water Rule and Clean Power Plan “were developed and imposed by the Executive Branch, without any explicit grant of additional authority, appropriations, or other involvement by Congress.” If that was the proverbial breaking point, it was building for over a decade. The Chamber cites the following factors among those that precipitated its call for change:

A literal snapshot of the report, the Chamber recommends that Congress take the following steps to fix the broken relationship between the EPA and the states (as well as protect and promote the lobby’s interests, I presume). 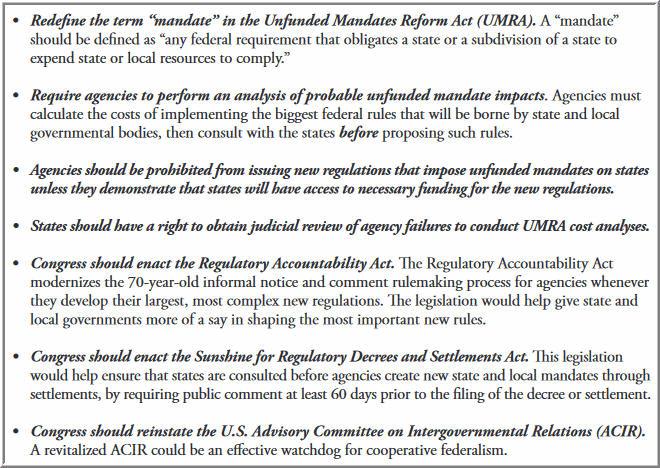 Credit: U.S. Chamber of Commerce, “The Growing Burden of Unfunded Mandates on the States”

For more details on the pace of regulations issued, the costs incurred, and the parties and policy the Chamber deems responsible, see the full report.