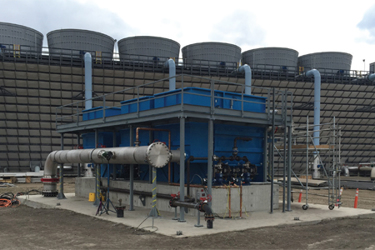 Shepard Energy Centre (owned by Enmax and Capital Power Corporation) is located in Calgary, Alberta, Canada. It began operating in March 2015 and is capable of generating over 800 megawatts of electricity to Alberta residents using natural gas. The facility utilizes (2) combustion turbines featuring a combinedcycle technology to generate electricity, and in addition, processes waste heat through a steam turbine to produce even more electricity. This electricity generation process makes Shepard approximately 30% more efficient than traditional coal-fired plants, and reduces overall fuel costs. Not only is Shepard’s plant more efficient, but better for the environment by emitting less than half of the CO2 emmissions per megawatt hour compared to a coal generated facility. Sulphur dioxide and nitrogen dioxide emissions are also reduced.