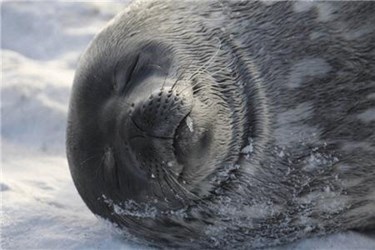 At the invitation of the Australian Antarctic Division, Dr Michelle Power from Macquarie University joined the field team at Davis research station to examine how sustained human waste discharge from research stations has the potential to affect the diversity and evolution of native Antarctic microbes, as well as introduce disease to wildlife in the ecosystem.

With most research stations located on the coast of Antarctica, the research provides scientific evidence to support development of improved regulations for human waste disposal.

“Some of the identified strains that we have detected in seals are known to cause disease in humans and birds. Antibiotic resistance genes, currently a major global issue, were discovered in many of the strains we tested. The antibiotic resistance genes were not detected in penguins or seals but were found in an Antarctic shellfish species which filters the water for its food,” said Dr Power.

As part of its commitment to protecting the Antarctic environment, the Australian Antarctic Division undertook a larger study to assess the environmental impact of sewage discharge in Antarctica in 2009/10.

Guidelines currently in place for treatment of sewage, established by the Antarctic Treaty system, allow research stations to dispose of untreated sewage directly into the sea – within certain parameters.  These include conditions that allow for its rapid dilution and dispersal into the marine environment. Research led by Australian Antarctic Division marine scientist, Dr Jonny Stark, shows that such conditions are unlikely to occur at most Antarctic stations.

Australian Antarctic Division Chief Scientist, Dr Gwen Fenton, said the Division partnered with research and industry to undertake a major engineering project to design and upgrade wastewater treatment for use in Antarctic conditions in response to the combined results of the studies.

“With more than 30 nations operating in Antarctica, and around 4000 people living in Antarctic research stations during the summer months, the potential impact of their presence to the surrounding ecosystem cannot be underestimated,” continued Dr Power.

The comprehensive steps taken by Australia to understand and address the environmental impacts of wastewater discharge at Australia’s research stations represent Antarctic best practice, and reinforce Australia’s international leadership in the fields of Antarctic science, operations and environmental management.

Wastewater management is recognised by all national Antarctic programs to be a complex issue, and a wide range of technologies are in use across Antarctic stations. Further steps to prevent the introduction of non-native species and disease will be discussed at the next Antarctic Treaty Consultative Meeting will be held in Chile later this month.

“There is currently no acceptable measure of impact of untreated sewage disposal in Antarctica and I would argue that simple genetic tools can, and should be used to determine the extent of gene pollution across Antarctica,” continued Dr Power.