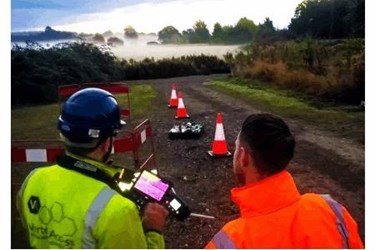 The new technology has already been used to successfully identify leaks in the rural villages of Southery and Wissington, Norfolk, and the company plans to trial the new technology more over the coming months.

With nearly 24,000 miles of water pipe to keep an eye on, much of it in rural and remote areas, Anglian Water hopes the aerial technology will help reduce the cost and time taken to find a leak and pinpoint its location more precisely by spotting changes in soil temperature near the water pipes.

Emma Staples from Anglian Water said: “The drones are just the latest weapon in our £60M war on leakage.

“We’re testing other high-tech tools and have put more boots on the ground. Our 300-strong leakage team now includes new detection teams tasked with uncovering hard-to-find leaks, who have been given specialist training on how to use the new drone technology.

“We’ve also invested millions to better manage the water pressure in our network of pipes, dramatically reducing the number of bursts.”

Anglian Water’s focus and innovative approach has made it an industry leader. Last year the company’s leakage level was it’s lowest-ever – and the lowest in the country, at less than half the national average.

Emma added: “We hate leaks as much as our customers do and we’re determined to keep reducing them. Our targets are already way beyond those of other water companies and we’re always looking for new ways to push things forward.

“The drones have already saved us time and money finding and fixing hard-to-spot leaks. We’ll continue to trial them over the coming months, focussing on leaks in and around Newmarket where our innovation hub, the Shop Window, is based.

“Leading on leakage reduction is what our customers told us they wanted. It’s the right thing to do for them and the environment. It also helps to increase of region’s resilience to drought.”

The drones will also help Anglian Water minimise disruption for customers, by covering large distances in a short space of time. The sensor and camera on the drone can identify differences in soil temperature which could be caused by water escaping from the pipe. These differences are then investigated further by a leakage technician on-site, rather than needing to be analysed back in the office.

All of this means the job can be carried out quicker and more precisely – meaning less digging, less money, less water lost and less disruption to customers.