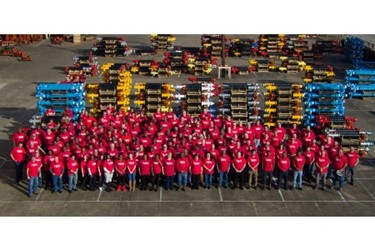 The year 1969 was historic in many ways. Neil Armstrong became the first human to set foot on the moon. Woodstock attracted more than 400,000 rock ‘n’ roll fans. The first communications were sent through the ARPANET, the Internet’s predecessor developed by the U.S. Department of Defense, and the microprocessor was invented.

Also in 1969, in a move to expand service to the waterworks industry, AMERICAN Cast Iron Pipe Company purchased the iron valve and hydrant facilities of Darling Valve and Manufacturing Company in Pennsylvania. The sale included Darling Valve in Texas, and that set the stage for a long and celebrated relationship between two companies – one in Birmingham and the other in Beaumont.

On March 2, AMERICAN Valve and Hydrant Company in Beaumont, Texas, celebrated its first 50 years as part of the AMERICAN family of companies. “AVH looks very different today than in 1969,” said AVH President Tim Sudela. “We have new and enhanced product offerings produced with equipment, tools and technology that would have been difficult to imagine 50 years ago.”

Sudela said one thing has not changed. “The story of AVH is the story of employees practicing the Golden Rule in Beaumont for 50 years.”

Today, AVH and Waterous – an AMERICAN company in South St. Paul, Minnesota, that celebrated its 125th anniversary in 2011 – produce the AMERICAN Flow Control line of products sold in the U.S. and internationally.

Here’s a look at some AVH history highlights, starting with its Pennsylvania roots.

1951 – Entrepreneur Bob Mabry buys an industrial site on Hollywood Street in Beaumont, Texas, for construction of an iron foundry with machine shop. By the late 1950s, the Mabry foundry is shipping cast iron valve and hydrant components to Darling in Williamsport.

1982 – First truckload is shipped of AMERICAN-80 CRS Gate Valves, a licensed version of the Hawle Elypso.

1989 – ACIPCO acquires the Waterous Company, which was founded in 1886, a producer of fire pumps, hydrants and suppression systems in South St. Paul, Minnesota.

2002 – New manufacturing building completed with a giant letter “A” entrance.

2016 – ALPHA end connection options are introduced for 4- to 12-inch resilient seated gate valves. With its single, top-mounted bolt, the ALPHA restrained joint is much easier to install than the mechanical joint.

2017 – Tropical Storm Harvey hits. Almost 30 AVH employees are severely impacted by flood waters, and many more are unable to return to the plant for days or weeks. The AMERICAN family and friends raise almost $63,000 in donations.