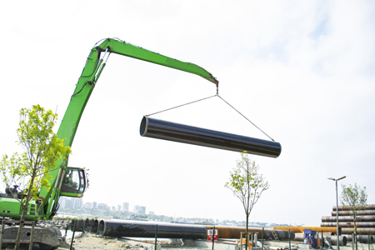 Ports throughout the U.S. have extremely critical infrastructure needs, and port officials in numerous states are readying projects for launch. America’s ports are in desperate need of modernization, expansion, upgrades, and repairs if they are to remain viable. Because of the economic contributions that ports provide to the U.S. economy, officials can no longer ignore or defer these essential projects.

If, or when, Congress passes the infrastructure bill, billions in federal funding will be available, but even that amount of new revenue will likely not cover costs for the most critical needs. Most states have allocated large amounts of funding, and public-private partnerships are being considered for some port initiatives. Regardless of the funding sources, it is evident that port modernization, which is long overdue, is finally beginning rather aggressively in America.

Every Texas port must undergo critical upgrading and modernization. Approximately $3.6 billion will be required for the state to cover the most immediate needs at its ports. A 2022-2023 Texas Port Mission Plan outlines numerous high-value projects that are priorities.

The Port of Corpus Christi Authority is seeking $155.5 million for three liquid bulk dock projects at the Avery Point Terminal. The docks, with an average age of 56, are suffering from severe degradation of key components and cannot adequately accommodate large Suezmax vessels arriving at the same time.

The Port of Beaumont is planning a $61.6 million dock facility that will be capable of loading and unloading supersized vessels. The project will feature a pedestrian walkway, access roads, and pipeline connectivity.

The Port of Galveston needs to spend $60.7 million to repair damaged and decaying infrastructure that is unusable. The scope of this project will include dredging, constructing two fill-retaining structures, improving storm sewers, installing flexible pavement, and replacing a deteriorated bulkhead.

Approximately $27.2 million is needed for marine terminal improvements and crane upgrades. This effort will include $10.2 million for wharf upgrades that are now required for ultra-large container vessels and $8.5 million for reconstruction of berths at the port. Other projects considered high priorities include a channel deepening project, substation replacements, and the installation of electric truck charging stations.

The Port of Long Beach in California recently approved a Fiscal Year 2022 budget that includes $622.4 million for the Long Beach Harbor with half of that amount dedicated to capital improvement projects. A project to construct a second fire station will support the port’s fireboat vessels and its landside fire assets. It carries a projected cost of $35.6 million. An additional $38.4 million will be spent on improvements to wharfs and another $870 million is earmarked for the expansion of a rail yard. In 2022, construction will begin on a track realignment project that carries a cost estimate of approximately $40 million.

The Port Authority of Allegheny County introduced a 2022 operating and capital budget that details $53.4 million in projects. Anticipated initiatives include rail and bus facility improvements and the installation of electric charging infrastructure. Other port divisions will receive $1.7 million for systemwide upgrades of security and fire alarm systems. The Port Authority also approved its first range transportation plan, NEXTransit, that outlines 18 planned projects that cumulatively carry a $3.7 billion price tag.

The Port Authority of Pittsburgh plans to begin work in 2022 on a new two-level deck that will increase the available parking by 360 spaces. The authority has received an $11.5 million federal grant for the project. The construction project will be comprehensive as it will require moving the lot’s main entrance to the north, widening Route 19 to add turning lanes, and construction of retaining walls, drainage improvements, and new paving work.

These are just a few examples of upcoming contracting opportunities at ports throughout the country. Major ports in America are all in dire need of attention, and officials in every state where ports are located are well aware of the economic engines of ports. Funding will be found, and ports will be modernized in the very near future. Private sector firms interested in partnering to keep America’s ports operating at peak capacity should be getting positioned now to compete for these very large partnering opportunities.