Aging And In Need Of Attention: America's Infrastructure And Its 17 Million Workers 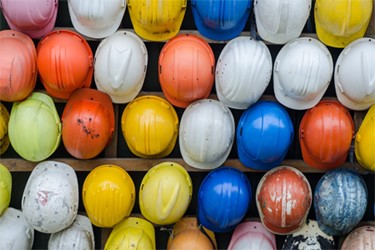 By now, you’re probably familiar with America’s infrastructure challenge. From clogged roads, to unsafe pipes, to limited broadband access, the list goes on. Concerns over infrastructure affordability, reliability, and overall investment also remain a constant. And despite potential infrastructure solutions coming from leaders in Washington, along the campaign trail and beyond, there has been little federal action.

But what you may not have thought or heard as much about is the enormous infrastructure workforce challenge facing the country.

Just as our physical infrastructure systems are aging and in need of attention, so too are the workers who design, construct, operate, and oversee these systems. In other words, these workers are not only constructing projects in the short-term, but maintaining all types of facilities in the long-term — from ports and power plants to railroads and waterways. The problem is that many of them are nearing or are eligible for retirement, and there is not a strong training pipeline to educate and equip a new generation of talent with the skills they need.

Past Brookings research has shown the wide range of workers involved in managing the country’s infrastructure, and the latest labor data from 2018 shows a continued demand for skilled workers throughout this foundational economic sector.

Crucially, though, this workforce challenge also presents a workforce opportunity. At a time when many Americans are still struggling to secure stable, well-paying jobs, infrastructure offers just that.

Indeed, the enormous number and variety of infrastructure jobs speak to the multiple career pathways available to workers across all skill levels and all regions. Estimates from 2018 find that nearly 17.2 million workers — or about 12 percent of all workers nationally — are employed in infrastructure jobs, concentrated in 94 different occupations. Electricians, water treatment operators, and civil engineers are among the largest occupations overall, in addition to many other positions in the skilled trades, finance, and management. Truck drivers and material movers remain essential to carrying out a range of non-automated tasks. Taken together, infrastructure jobs employed more workers than retail (16.0 million) or manufacturing (12.6 million), among other sizable sectors. 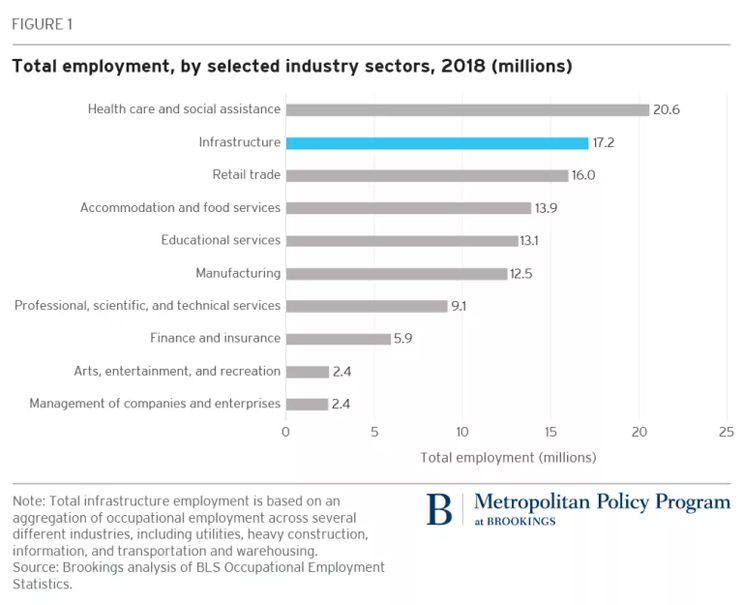 Infrastructure jobs also tend to offer more competitive and equitable wages. This is particularly true at lower ends of the income scale — at the 10th and 25th percentile — meaning that even lower-skilled workers or those just beginning their careers can gain a stronger economic foothold. In fact, workers at these levels typically earn 30 percent higher wages compared to all occupations nationally; in 2018, infrastructure workers earned annual wages of $27,590 and $33,920 at the 10th and 25th percentile, respectively. By comparison, all workers nationally earned $20,690 and $25,740. 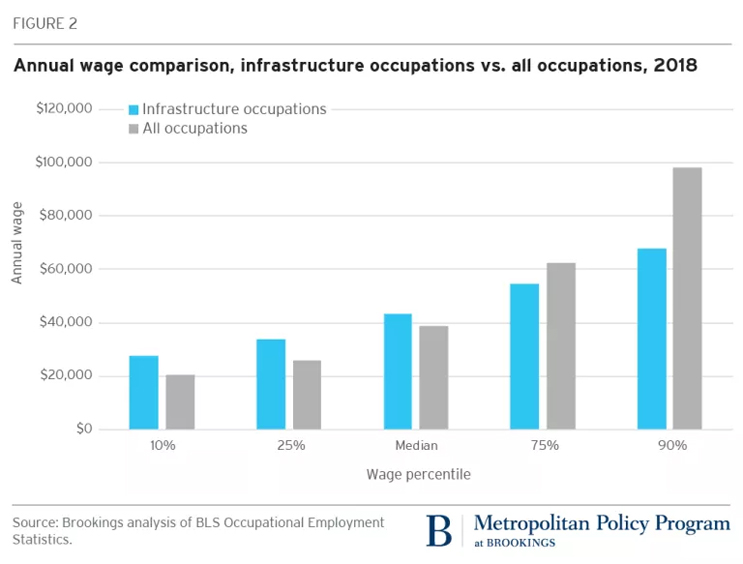 Finally, infrastructure jobs have lower formal educational barriers to entry, offering more accessible pathways to continued learning and career growth. In 2018, just 13 percent of infrastructure workers had a bachelor’s degree or higher, compared to 37 percent of all workers nationally. And more than half — 54 percent — had a high school diploma or less. Although managers, engineers, and several infrastructure workers demand more advanced degrees, most technicians, mechanics, and other workers do not. Instead, many of these workers require more extensive on-the-job training and develop competencies in a wide range of transferable skills, including mechanical, technical, and scientific knowledge. 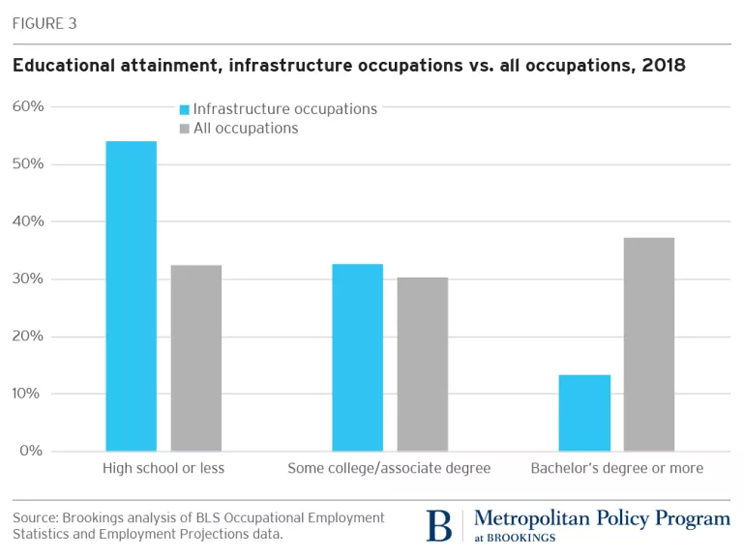 The fact that infrastructure jobs lead to a number of different career pathways, pay higher wages, and require lower levels of educational attainment speaks to their central role in promoting greater economic opportunity.

Policymakers need to further elevate this opportunity in ongoing infrastructure debates and, more importantly, accelerate investment in ongoing educational and workforce development efforts, which are frequently emerging at a state and local level. Employers, educators, labor groups, training organizations, and many other leaders have a role to play in recruiting, training, and retaining a skilled infrastructure workforce. While new regional partnerships, institutional platforms, and other pilot efforts are making a difference across the country, there remains a need for more widespread replication and adoption of solutions, including apprenticeships and local hiring practices in support of underrepresented communities.

Now is the time to act, not only in advance of the 2020 presidential election, but to finally fix America’s infrastructure and support a skilled workforce for decades to come.

This research was originally published by The Brookings Institution.