The Milken Innovation Center at the Jerusalem Institute has mapped out best practices for water industry innovation and a framework for converting ideas into action.

A project of the California-Israel Global Innovation Partnership, Financial Models for Water Sustainability is a report developed by the Financial Innovations Lab™, a one-day seminar featuring 70 water experts. Researchers from the Lab drew on the experience of Israel — a water-scarce, drought-prone country that has evolved into a world leader in water technology — to create a sustainability game plan for California and others to follow.

The California-Israel connection runs deep. Collaborators from stateside institutions such as NASA and universities such as UC Berkeley, UC Irvine, and UCLA helped ensure that the Lab's methodology suited California from a feasibility standpoint. From a water standpoint, the two regions are quite compatible; both Israel and California have a dry, slowly warming climate and devote the majority of their water resources to agriculture. California has five times Israel's population, but the increased scale only presents greater potential for reward. Even beyond The Golden State, these solutions should be recognized for their proven efficacy — capable of turning a desert nation into a water exporter — and should therefore be considered, at least in part, wherever the opportunities for implementation and benefits can be realized.

Nothing gets done without financing, which is the foundation from which the report is built — innovation, water savings, and sustainability being the byproducts. In the U.S., 90 percent of municipal projects are financed on the state or local level, so waiting on federal aid is not a viable strategy. The federal government can always impose itself, however, and has the ability to help or hinder progress with regard to financial arrangements. According to the Lab, the following would work if enabled and employed.

Most often, innovation stems from the private sector. EIF is a way to get water-saving technologies or programs implemented, while shifting financial risk and reward from government to private investors. The report explains:

“In an environmental impact bond (EIB), institutional pension funds, insurance funds, philanthropies, and other traditional investors could invest funds in proven environmental “impact projects” that deliver reduced or avoided costs to farmers or to municipal water authorities. The realized savings would support the repayment of the obligation. The savings could be shared, thereby, reducing the overall cost to the payer.” 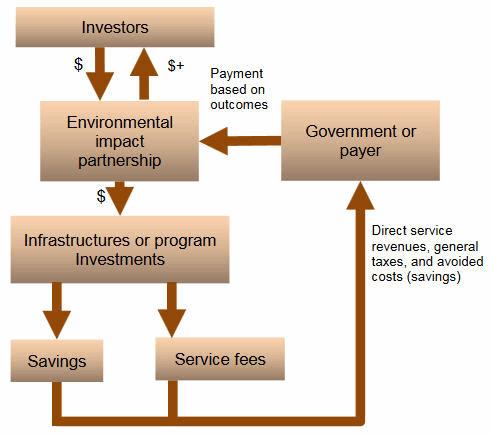 An energy service company (ESCO) agreement works in much the same way as the above, but is focused on energy savings rather than water savings. Popular in California, ESCO contracts are performance-based guarantees and thus low-risk by nature. The ESCO is tasked with lowering the total energy spend of the utility through across-the-board technology improvements and process optimization, getting paid only after milestones are reached and savings are garnered. ESCOs are yet another way to leverage private sector innovation to save money and water supplies, since vast amounts of water are required to produce energy.

More comfort for the risk-averse water manager, whether municipal or industrial, efficacy insurance guarantees that a technology will perform as promised, or that restitution is provided in the event that it doesn’t. Such coverage can include issues related to regulation, production, and delivery. U.S. plants understand that treatment systems will first require regulatory approval, but efficacy insurance can help secure financing from commercial lenders wary of technologies without long track records. Moreover, it is useful for the many systems at the plant not directly tied to treatment but integral to operational efficiency and expenditure. The private/industrial sector, which typically adopts innovation more swiftly, may also be first in line to reap the benefits of efficacy insurance.

The aforementioned financial mechanisms can help get new technologies in place, but what drives the desire to do so? The Lab cites the innovation of water policy as its final (though multilayered) best practice, which requires an internal and outward commitment to evolving past conventional technologies, processes, and even thought patterns in order to transcend the status quo and surmount difficult challenges such as water scarcity. To get there, as Israel has, the report cites the following “smart practices that differentiate the Israeli water sector from its counterparts elsewhere in the world.”

For more details on best practices and how to implement them, including start-up of pilot projects, see the Financial Innovations Lab’s full report. More information on the Milken Innovation Center’s California-Israel Global Innovation Partnership can be found here.