A Filter For Environmental Remediation 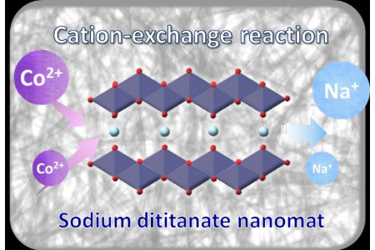 Scientists at Osaka University create seaweed-shaped sodium titanate mats made of nanofibers that can remove cobalt ions from water, which may help provide a source of safe, recycled drinking water by removal of heavy metals and radionuclides

A team of researchers at Osaka University has developed a nanopowder shaped like seaweed for a water filter to help remove toxic metal ions. Made of layered sodium titanate, the randomly oriented nanofibers increase the efficacy of cobalt-II (Co2+) ion capture. This work might lead to cheaper and more effective solutions for filtering water that is currently unusable due to hazardous heavy metals or radioactive fallout.

As the global population continues to increase, so will the need for drinkable water. Sadly, many water sources have become contaminated with heavy metals, such as cobalt, from industrial waste or radioactive runoff. Sodium titanate has been widely used to filter out these toxic substances, but its efficiency is not enough. Sodium titanate is generally a two-dimensional layered material, but its crystal structure can vary based on the chemical composition and preparation method. To effectively capture radioactive and/or heavy metal ions, the morphological control of the sodium titanate is very important.

Now, researchers from the Institute of Scientific and Industrial Research at Osaka University have developed a new method to create highly efficient sodium titanate filters. “We used a template-free alkaline hydrothermal process to produce the mats,” first author Yoshifumi Kondo says. The researchers found that increasing the hydrothermal synthesis time caused the initially round crystals to become elongated and fibrous, and to form the seaweed-shaped mats consisting of the randomly oriented nanofibers. This seaweed-like nanoscale morphology increased the surface area of the mats, which improved the removal efficiency of Co2+ during sorption tests.

“Due to the progress of global warming and serious environmental pollution, the need for safe ways to remove radioactive materials and heavy metals from water resources has become even more critical,” senior author Tomoyo Goto says. Compared with a commercially available material, the nanostructured sodium titanate mats showed improved performance for capturing Co2+ ions. The method is expected to be applied for other purification systems that remove heavy metals and radionuclides from wastewater.

The article, "Sorption capacity of seaweed-like sodium titanate mats for Co2+ removal," was published in RSC Advances at DOI: https://doi.org/10.1039/D0RA06662A

About Osaka University
Osaka University was founded in 1931 as one of the seven imperial universities of Japan and is now one of Japan's leading comprehensive universities with a broad disciplinary spectrum. This strength is coupled with a singular drive for innovation that extends throughout the scientific process, from fundamental research to the creation of applied technology with positive economic impacts. Its commitment to innovation has been recognized in Japan and around the world, being named Japan's most innovative university in 2015 (Reuters 2015 Top 100) and one of the most innovative institutions in the world in 2017 (Innovative Universities and the Nature Index Innovation 2017). Now, Osaka University is leveraging its role as a Designated National University Corporation selected by the Ministry of Education, Culture, Sports, Science and Technology to contribute to innovation for human welfare, sustainable development of society, and social transformation. For more information, visit https://resou.osaka-u.ac.jp/en/top