A Better Way: An Application For Risk Characterization of HABs On The Ohio River 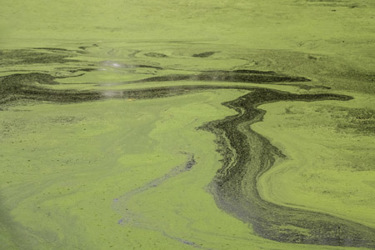 When you think of water, you might imagine deep blue ocean waves crashing against a shoreline or perhaps the still calm of a forested lake, but on an August morning in the summer of 2015, the lockmaster at the Pike Island Lock and Dam saw something much different. That day, EPA’s regional office in Wheeling, WV, received a concerned phone call from the Ohio River Valley Water Sanitation Commission (ORSANCO) notifying them of what was described as “antifreeze-green colored paint” flowing down the Ohio River. But this was no paint spill. Rather, Microcystis, a naturally occurring species of cyanobacteria, or blue-green algae, known to produce toxins harmful to animals and humans, was quickly taking over one of the most influential rivers in the continental U.S.

By mid-September of that same year, the Ohio River harmful algae bloom (HAB) was affecting over 700 miles of the 981-mile-long river. Advisories for recreational boaters remained in place until November. After the bloom ended, EPA began pulling together a team of professionals to address this safety concern in anticipation of future HABs events. By early 2017, the project team was forming a specific plan to address the need for a cyanobacterial harmful algal bloom (cyanoHAB) risk management tool for the Ohio River. An interdisciplinary team of EPA scientists began working together with ORSANCO to address this need.

“The unprecedented HAB in 2015 caught many of the river water quality professionals and regulatory agencies off guard,” commented Chris Nietch, an EPA ecologist and one of the team leads. “I’d been actively involved in HAB monitoring in one of the reservoirs draining to the river and I observed the impact that the Ohio River bloom had on the regulatory authorities as they worked to gauge the relative risk. I figured there had to be a better way.”

Greg Youngstrom, Senior Environmental Scientist from ORSANCO, echoed this sentiment. “ORSANCO frequently plays that role of being a central clearinghouse for information. Many states relied on us for a lot of the information that they used to make decisions regarding the 2015 bloom, but it just far exceeded anything that anyone was prepared to deal with. It was really a response on the go.”

“The West Virginia Department of Environmental Protection arranged for a flyover of the Ohio River in the fall of 2015, which documented that the Ohio River was an ‘antifreeze green’ color from bank to bank for several hundred miles,” relayed Frank Borsuk, an EPA aquatic biologist who championed the effort, along with other EPA scientists.

Historically, cyanoHABs occur in slow or unmoving water. For a bloom of this magnitude to occur in moving water was unprecedented. While there were several resources available to predict and mitigate blooms on standing water, responding to an algal bloom in moving water was a significantly different challenge, noted EPA aquatic toxicology researcher Jim Lazorchak. “Much of what we knew about lake blooms had to be adjusted,” he said.

The magnitude of the 2015 Ohio River cyanoHAB led drinking water treatment plants to add treatment processes to ensure the removal of all cyanotoxins and cyanobacteria from treated waters. Unfortunately, communities along the Ohio River were unprepared for posting health advisories for recreational activities, simply because a bloom of this magnitude had never occurred. While swift action treated the situation and helped prevent human exposure to HABs, the event exposed a gap in scientific research regarding the ability to predict HABs on rivers.

Predicting HABs on the Move

Addressing this gap was the goal of the EPA project team. In their recently published paper in the journal Water, the project team writes, “The study goal was to produce a tool that could be used by ORSANCO for assessing the potential for cyanoHABs blooms in real time and at multiple locations along the river’s length. When the project started, the effort was constrained by the fact that there was only one cyanoHAB event ever documented on the Ohio River. […] We hypothesized that we could take advantage of the physiography of the Ohio River along with its dense hydrologic sensing network to develop a risk characterization tool applicable to the entire river in support of ORSANCO’s cyanoHABs risk management goals. The central science question was how to best model the risk given the available data and the urgent need.”

Beginning in 2018, the team conducted research over the course of three years to create a web-based application that used key factors to predict HABs. The team developed a multi-pronged approach that modeled risk probabilities for sites along the entire river and included water quality data to help evaluate the model predictions. The efforts resulted in a real-time HABs risk characterization tool that is now being used and maintained by ORSANCO.

Jeff Vogt, senior chemist at Greater Cincinnati Water Works (GCWW), relayed that as his division deals with water quality and treatment of point source waters, the model allows him and his team to better gauge the drinking water treatment plant’s source water quality. “[The HABs risk characterization tool] is a valuable tool for GCWW because it can give us a better picture of what’s happening upstream in the Ohio River and even in the surrounding tributaries,” Vogt said. “You can use the tool to see data from various points on the river to really understand what’s going on where and how to best prepare for it.”

HAB events on rivers are likely to become increasingly common as climate change pushes towards longer, hotter, drier summers. As spring showers wash nutrients into the river, an extended hot drought period will cause water to evaporate from the river. Less water in the river creates a higher concentration of nutrients as well as a slower flow, factors which impact the likelihood of a HAB event. “This aspect we have very little control over. So, we need to pay more attention to reducing nutrient loads and the timing of those loads in the early summer,” Nietch said. “Supporting regulatory agencies like ORSANCO in assessing, sampling, and monitoring blooms, as we have done here, is critical to minimizing risk.”

Much of EPA’s research on HABs relies on satellite imagery and monitoring buoys that can be strategically positioned to capture water quality dynamics. “Currently these tools are not as useful on rivers, so we must develop new approaches, like this one,” Nietch said. “We are working to use the National Weather Service’s ensemble hydrological forecasts in our prediction models. This will allow us to forecast bloom occurrence and persistence potential early in the summer, which will give ORSANCO drinking water treatment plant operators, and the general public, an idea of whether there is likely to be an active bloom period in late summer.”