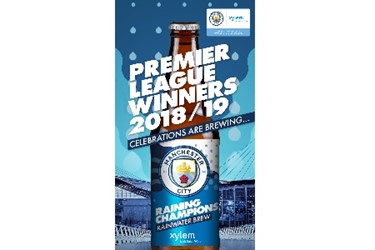 To celebrate Manchester City’s epic Premier League title win, global water technology company Xylem, has teamed up with City and Heineken Manchester to produce ‘Raining Champions’ – a limited edition beer made with purified rainwater collected from the rooftop of City’s Etihad Stadium. ‘Raining Champions’ is the latest in a campaign by Xylem and City to show football fans globally how every country on earth faces serious and escalating water challenges, such as lack of access to clean water and flooding.

Brewed for the Premier League’s reigning champions, the beer will be used to toast Manchester City as part of the end of season celebrations, with a chance for some lucky fans to taste the brew over the coming months.

Joseph Vesey, Senior Vice President and Chief Marketing Officer at Xylem, explained: “With Manchester averaging about 150 rainy days per year, challenges like water scarcity may seem a world away but the reality is that these issues are closer than we think. A staggering 3.6 billion people – almost half the global population – currently live in areas that are water-scarce at least one month per year and, by 2050, projections estimate that more than 5 billion people could suffer water shortages. What better way to educate football fans about these urgent challenges and celebrate a phenomenal season for Manchester City than by toasting the club with a rainwater brew. Through this initiative, and our wider ‘Closer Than You Think’ campaign, we aim to inspire the next generation of fans to think differently about water challenges and solutions – like using recycled water to help tackle water shortages – and encourage people of all ages to help create a more water-secure world.”

Recycled water is one long-term, sustainable solution to water scarcity. The ‘Raining Champions’ beer was brewed using rainwater from the Etihad purified with advanced, proven treatment technologies from Xylem that produce safe clean drinking water to the highest standards. Fans are invited to check out some water solving tips here.

Damian Willoughby, Senior Vice President of Partnerships at City Football Group, parent of Manchester City, said: “Brewing a beer from rainwater collected from the heart of our football club is a fantastic and creative way to celebrate Manchester City winning another Premier League title. Together with Xylem, we hope this will inspire fans to do their bit and make a difference.”

Stephen Moore, brewery manager at HEINEKEN Manchester said: “We were really pleased to be able to help our Manchester neighbours out by brewing a beer in our on-site micro-brewery. This is the first time we’ve brewed a beer using purified rainwater – and now Manchester City fans can toast their team with a beer fit for the reigning champions!”

As part of Xylem’s multi-year partnership with Manchester City, Xylem recently partnered with the Club to deliver clean water towers, WASH education, and sports and leadership training to communities in Bangalore, India, as part of an initiative that will benefit over 5,000 children this year. The ‘Cityzens Giving’ project ‘Water Goals,’ sponsored by Xylem, earned the top ranking among six projects in Manchester City’s annual Cityzens Giving global community initiative, receiving more than 450,000 votes from football fans around the world. The Water Goals project in Bangalore is part of Xylem’s ongoing social impact initiative, conducted by the company’s corporate citizenship program Watermark, alongside Xylem’s partner Planet Water Foundation, which is responsible for water tower construction.

The name Xylem is derived from classical Greek and is the tissue that transports water in plants, highlighting the engineering efficiency of our water-centric business by linking it with the best water transportation of all – that which occurs in nature. For more information, visit www.xylem.com.

Under manager Pep Guardiola, one of the most highly decorated managers in world football, the Club plays its domestic and UEFA Champions League home fixtures at the Etihad Stadium, a spectacular 55,000 seat arena that City have called home since 2003. Today, the Stadium sits on the wider Etihad Campus, which also encompasses the City Football Academy, a state-of-the-art performance training and youth development facility located in the heart of East Manchester. Featuring a 7,000 capacity Academy Stadium, the City Football Academy is also where Manchester City Women’s Football Club and the Elite Development Squad train on a daily basis and play their competitive home games.