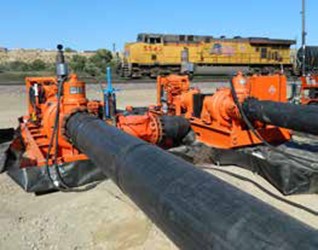 During any given year, average rainfall in the Victor Valley of Southern California is approximately five inches. But 2010 wasn’t the average year. Five storms in December 2010 dropped one year’s worth of rain – more than five inches – in just one week, unleashing a chain of events that overwhelmed systems and wreaked havoc throughout the area.

Pushed beyond the limits of its banks, the Mojave River gushed at more than 36-cubic-feet-per-second (CFS) in the Upper Mojave Narrows. The main sewer interceptor beneath the river became dislodged, causing raw sewage to spill over its banks and onto the Mojave Desert. It was an environmental catastrophe and declared a federal emergency by the Federal Emergency Management Agency (FEMA). And it required immediate attention.