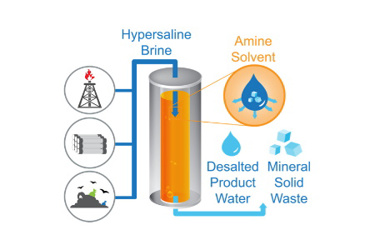 Water security is becoming an urgent global challenge. Hundreds of millions of people already live in water-scarce regions, and the UN projects that by 2030 about half the world’s population will be living in highly water-stressed areas. This will be a crisis even for developed countries like the U.S., where water managers in 40 states expect freshwater shortages within the next 10 years. As the global population and GDP grow, so will the demand for freshwater. And, with the continuing rise of global temperatures, water shortages will only get worse.

Desalination processes are increasingly being relied upon to augment water supplies. In fact, global desalination capacity is projected to double between 2016 and 2030. But these processes are expensive and can be harmful to the environment. The ultrahigh salinity brines that are the byproduct of desalination can be several times that of seawater salinity and its management options are especially challenging for inland desalination facilities such as those in Arizona, California, Florida, and Texas.

Over the past year, Columbia Engineering researchers have been refining their unconventional desalination approach for hypersaline brines—temperature swing solvent extraction (TSSE)—that shows great promise for widespread use. TSSE is radically different from conventional methods because it is a solvent-extraction-based technique that does not use membranes and is not based on evaporative phase-change: it is effective, efficient, scalable, and sustainably powered. In a new paper, published online June 23 in Environmental Science & Technology, the team reports that their method has enabled them to attain energy-efficient zero-liquid discharge (ZLD) of ultrahigh salinity brines—the first demonstration of TSSE for ZLD desalination of hypersaline brines.

“Zero-liquid discharge is the last frontier of desalination,” says Ngai Yin Yip, an assistant professor of earth and environmental engineering who led the study. “Evaporating and condensing the water is the current practice for ZLD but it’s very energy intensive and prohibitively costly. We were able to achieve ZLD without boiling the water off—this is a major advance for desalinating the ultrahigh salinity brines that demonstrates how our TSSE technique can be a transformative technology for the global water industry.”

Yip’s TSSE process begins with mixing a low-polarity solvent with the high salinity brine. At low temperatures (the team used 5 °C), the TSSE solvent extracts water from the brine but not salts (which are present in the brine as ions). By controlling the ratio of solvent to brine, the team can extract all the water from the brine into the solvent to induce the precipitation of salts—after all the water is “sucked” into the solvent, the salts form solid crystals and fall to the bottom, which can then be easily sieved out.

After the researchers separate out the precipitated salts, they warm up the water-laden solvent to a moderate temperature of around 70 °C. At this higher temperature, the solvent’s solubility for water decreases and water is squeezed out from the solvent, like a sponge. The separated water forms a layer below the solvent and has much less salt than the initial brine. It can be readily siphoned off and the regenerated solvent can then be reused for the next TSSE cycle.

“We were not expecting TSSE to work as well as it did,” Yip says. “In fact, when we were discussing its potential for ZLD, we thought just the opposite, that the process would likely give out at some point when there is just too much salt for it to keep working. So it was a happy surprise when I convinced lead researcher Chanhee Boo to give it a try, for the heck of it, on a Friday afternoon and we got such great results.”

With a simulated (lab-prepared) brine feed of 292,500 part-per-million total dissolved solids, Yip’s group was able to precipitate more than 90% of the salt in the original solution. In addition, the researchers estimated that the process used only about a quarter of the energy required for evaporation of water—a 75% energy savings compared to thermally evaporating the brine. They reused the solvent for several cycles with no noticeable loss in performance, demonstrating that the solvent was conserved and not expended during the process.

In addition to managing inland desalination concentrates, TSSE can also be used for other high salinity brines including flowback and produced water from oil and gas extraction, waste streams from steam-driven electric power stations, discharges from coal-to-chemical facilities, and landfill leachate. Yip’s group is continuing to investigate the fundamental working mechanisms of TSSE, to engineer further improvements in its performance. This work includes further testing with real samples from the field, as well as optimization of the overall process.

About Columbia Engineering
Columbia Engineering, based in New York City, is one of the top engineering schools in the U.S. and one of the oldest in the nation. Also known as The Fu Foundation School of Engineering and Applied Science, the School expands knowledge and advances technology through the pioneering research of its more than 220 faculty, while educating undergraduate and graduate students in a collaborative environment to become leaders informed by a firm foundation in engineering. The School’s faculty are at the center of the University’s cross-disciplinary research, contributing to the Data Science Institute, Earth Institute, Zuckerman Mind Brain Behavior Institute, Precision Medicine Initiative, and the Columbia Nano Initiative. Guided by its strategic vision, “Columbia Engineering for Humanity,” the School aims to translate ideas into innovations that foster a sustainable, healthy, secure, connected, and creative humanity.