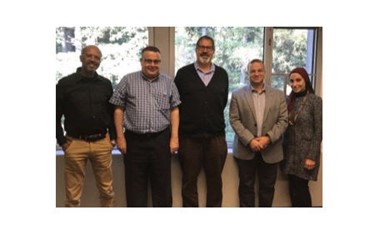 UC Santa Cruz is partnering with the American University in Cairo, nine other Egyptian and U.S.-based universities, and industry partners to help Egypt make the most of its limited water supply.

Funded by a five-year $30M grant from the U.S. Agency for International Development (USAID), the new collaborative is establishing the Center of Excellence for Water (COE-Water), an interdisciplinary applied research and education center located at Alexandria University in Egypt.

UC Santa Cruz will lead the research effort, with a focus on water supply and securing funding for research. Exchange programs will foster collaboration among Egyptian scholars, water professionals, government representatives, and students with their counterparts in the United States.

"For its population, Egypt is one of the most water poor countries in the world," said Brent Haddad, a professor of environmental studies who is leading the UCSC program. "The focus of this effort is very clear: Improve Egypt's applied research enterprise to make a difference in the lives of Egyptians, and bolster educational opportunities that will prepare students for careers in the water sector."

"The goal is to connect research and teaching with employment opportunities and industry," said Haddad.

In addition to UCSC and American University in Cairo (AUC), the lead institution (which is based in New York), the other U.S. universities are Washington State University, Utah State University, and Temple University. Each campus will play a different role in the initiative, including developing the governance structure of the COE, building the research portfolio, facilitating student and faculty exchanges, and developing curriculum. In addition to Alexandria University, Egyptian partners include some of the nation's largest public universities: Ain Shams University, Aswan University, Beni Suef University, and Zagazig University. The Center for Excellence is one of three such centers funded by USAID and housed at an Egyptian public university; the others focus on energy and agriculture.

Haddad, who has more than 20 years experience in urban water management, said he isn't taking a "top down" approach to the project. Rather, he said, the starting point will be the existing body of research and planning that has already taken place in Egypt.

"We shouldn't discount the excellent research and planning that has already occurred in Egypt," he said. "We need to find ways to integrate cutting-edge water research that's practical. We need solutions to Egypt's actual water problems."

The impacts of climate change on Egyptian natural resources and new water-treatment technologies—including reuse and desalination—will be part of the discussion, noted Haddad.

"Some technologies that aren't widely used in the U.S. could be a better match for Egypt," he said. Unlike the U.S., where large water-treatment plants are the norm, Egypt may be better suited to deploying a large number of small water-treatment plants that use different technology. UCSC's share of the USAID funding, which is about $2M, includes money to connect UCSC professors and graduate students with Egyptian researchers, as well as to host Egyptian students at UCSC.

Haddad will oversee development of a National Water Research Needs Agenda, a comprehensive effort that will begin with a literature review and surveys of government, university, and industry leaders about water research. The UCSC team will also sponsor webinars for broadcast to Egyptian universities on targeted topics, including one on the water-management challenges at antiquities and national parks, including the pyramids and temples on the upper Nile River.

UCSC will also lead the production of several papers on research practices and access in Egypt, addressing topics that include increasing women's access to research careers in water in Egypt. In addition, Haddad's team has been charged with organizing and managing about 40 small-, medium-, and large-scale research projects at Egyptian public universities. Haddad has already established a Committee on Research and Policy, made up of Egyptians and U.S. partners, to help implement this aspect of the project.

In December, Haddad hosted his counterparts from U.S. universities for a planning meeting, and this spring a team of 10 Egyptian water leaders will travel first to Washington D.C. and then to UC Santa Cruz for a three-day meeting where they will hear from senior academic and industry water experts and finalize a national water "research roadmap."

As Haddad approaches the one-year mark of the initiative, he is optimistic that it will have the impact he desires. "We're establishing a technology-readiness hierarchy for deployment in the water sector," he said. "It's very exciting."