Two Years After Chemical Poisoning Of West Virginia Drinking Water, 38 WV Citizen Groups Reach Out To Flint: 'We Are With You' 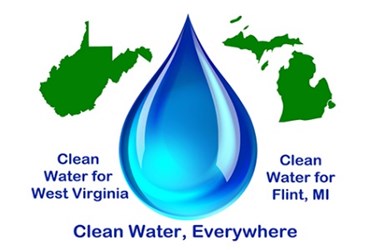 Citizen groups representing the 300,000 West Virginia residents who were without safe water for more than a week in some cases after a January 2014 chemical leak have a message for the residents of Flint, Michigan: "We are with you." Emphasizing the need for stepped-up state oversight and federal investment in water infrastructure, a joint letter from 36 WV groups to the residents of the Michigan city now undergoing a poisoned-water crisis is available online at http://ohvec.org/flint.pdf.

Concerned West Virginia groups also have a message for their state lawmakers: Stop trying to undercut the post-water crisis reforms that were put in place, and protect drinking water across the state. At a news conference today, the groups warned that state lawmakers in 2015 started eroding protections installed after the 2014 water crisis in West Virginia. In March 2015, a bill was signed into law scaling back the scope of the Aboveground Storage Tank Act (ASTA) and the number of tanks falling under state scrutiny.

One year later, short-sighted West Virginia lawmakers are threatening to further scale back water safety rules. Citizens are urging the legislators to restore crucial provisions stripped from the Aboveground Storage Tank regulations. They are also urging the legislators to adopt recommendations of the Public Water System Supply Study Commission, which was mandated by laws passed in 2014.

According to the groups, further erosion of aboveground storage tanks rules and ignoring the Commission's recommendations would make West Virginia dangerously vulnerable to a re-occurrence of the disastrous 2014 chemical poisoning of key supply of the state's drinking water. Safe drinking water is not just an urban problem in West Virginia. Both in the coalfields of the south and the northern fracking fields, access to clean, potable water is a critical issue.

Commenting on the parallels to the situation now unfolding in Flint and the need for more vigilance on the part of state and federal lawmakers, Charleston area resident Crystal Good said: "While the precise details are different, the overall stories of poisoned water here in West Virginia and in Flint are essentially similar. Although one is private water management and the other public, in both cases the government has failed to safeguard clean drinking water, especially in communities that are home predominantly to Black or low-income families. Access to safe water is a human right and its availability is ultimately the responsibility of government."

Paula Swearengin, a resident of southern WV who volunteers with the Ohio Valley Environmental Coalition, WV Direct Action Welfare Group, WV Chapter of Sierra Club and Friends of Water, added:"We had to fight tooth and nail to gain some drinking water protections after the chemical spillâ€”and prior to it. Industry has been lobbying politicians to roll back the post-spill safeguards. We demand our state politicians serve the people's interest. MCHM and other chemicals are not strangers to the Appalachian water supply. The Federal government is finally rightly examining just what is going on in Flint; it should also look at the assorted water crises here in West Virginia and in other states. We need a commitment to upgrading water infrastructure, especially in communities facing public health emergencies by turning on their tap."

The joint letter to the people of Flint from the 37 West Virginia organizations reads as follows:

"We are parents, teachers, faith-leaders, students, business owners and residents of West Virginiaâ€” and we stand with you. These last weeks, we have seen you in the paper and on the news: a mother with her children outside of a community center waiting to receive bottled water; preachers giving comfort in packed emergency rooms filled with scared neighbors; protesters gathering and calling on their government officials to take action.

Two years ago, we stood in those same lines, visited local emergency rooms, and demonstrated in the halls of power because our water, too, had been poisoned. A chemical tank failure contaminated the water of 300,000 people across nine counties surrounding our capital city of Charleston. In the few short months following the West Virginia Water Crisis, we learned that our water company, our Public Service Commission, our legislature, and state, local and federal regulators were failing us at all levels. What's more, no officials were willing to take responsibility for the crisis and each passed the buck to the next, pointing to one another's failings. The truth is, they all failed us.

Today, we stand alongside you as you grieve and rage. We know that no gesture on our part can erase the damage that untold amounts of lead poisoning has wrought on your children's bodiesâ€”their growth and development. We know that it's not only your bodies that were damaged, but also any trust you'd placed in your government officials. We remember what it's like to be told that our water was "safe" when our bodies told us it wasn't.

And we know that it was no mistake that this crisis happened in Flint, a predominantly Black community and one of the poorest in the nation. We recognize that communities of color and communities with high poverty rates, such as those counties affected by the West Virginia crisis, are at the greatest risk for water disasters across America. We live in a nation where environmental racism persists.

Working together across race and class in the aftermath of this disaster, we are making real change. We don't have all the answers, but we are gaining ground for safe, reliable water here in West Virginia, as you are in Flint, Michigan."