The Age Of Peracetic Acid — A Solution To Increasingly Challenging Regulations

By Kati Bell and Varsha Wylie

While chlorination has long dominated water disinfection, new approaches and technologies have emerged in the wake of disinfection byproduct (DBP) regulations. Could peracetic acid (PAA) be the option that dethrones the king?

Chlorination became the standard for disinfecting treated wastewater in the 20th century and has been key to successfully protecting public health. However, awareness of environmental impacts associated with wastewater chlorination raised concerns regarding how to effectively balance destruction of pathogenic microorganisms against effects of disinfection byproducts (DBPs) that have both environmental and public health consequences. This issue prompted governments in North America1 to reduce levels of chlorine and its byproducts in disinfected wastewater.2 These regulatory actions prompted significant research into alternative disinfection, advancing implementation of technologies such as UV and ozone. Today, more than a quarter of all municipal wastewater treatment facilities are utilizing UV disinfection; and while there is interest in ozone disinfection for wastewater, challenges of early technologies stunted development of this market.

New Regulatory Challenges
2015 was a year of significant challenges for chlorine disinfection. The U.S. EPA updated its ambient water quality criteria (AWQC) for human health. This update provided relief for concentrations of trihalomethanes (THMs); however, criteria for cyanide were lowered by nearly an order of magnitude — from 140 microns per liter (ug/L) to 4 ug/L for “Consumption of Water and Organisms.”3 Cyanide commonly occurs in municipal wastewaters, and a growing number of wastewater treatment plants (WWTPs) across the U.S. are detecting cyanide in chlorinated effluents at levels exceeding influent concentrations. This is particularly important as regulatory requirements for nutrient removal are being implemented across the country; related changes in effluent characteristics may increase cyanide formation potential, which has been the subject of several studies.4 Additionally, it is anticipated that the EPA will eventually revisit other disinfection products such as nitrosamines and dioxins because it did not update human health criteria for these chemicals due to outstanding technical issues at the time of criteria update.

In Canada, Environment Canada began work on a national strategy to manage wastewater effluents under the direction of the Canadian Council of Ministers of the Environment (CCME) in 2006. In 2007, CCME released a “Draft Canada-wide Strategy for the Management of Municipal Wastewater Effluent.” At the same time, Environment Canada published a “Proposed Regulatory Framework for Wastewater” to explain how the Canada-wide Strategy would be implemented. A draft regulation based on the CCME strategy was released for comment in 2010, and on July 28, 2012, the Wastewater Systems Effluent Regulations were published in the Canada Gazette. The regulations, which went into effect in January 2015, are made under the Fisheries Act, which prohibits unauthorized deterioration, disruption, and destruction of fish habitat. The new regulations are the first federal regulations that specifically address municipal WWTP effluents not previously regulated by the provincial authorities and impose strict limits for final effluent quality related to un-ionized ammonia, acute lethality testing, and total residual chlorine (TRC). Thus, many Canadian facilities that have historically used chlorination are faced with these new requirements.

Further, recent research has uncovered additional findings related to reactions of chlorine with constituents commonly found in treated wastewater, such as pharmaceuticals and personal care products (PPCPs) and other high-volume production chemicals. Many of these compounds are transformed during chlorine disinfection and can result in compounds that are more toxic than the parent chemical — and these DBPs are not eliminated by dechlorination. For example, chlorination of triclosan, an antimicrobial widely used in soaps, leads to substitution of the aromatic ring and cleavage reactions resulting in chloroform and related THMs, which are regulated DBPs. And, in surface waters downstream of WWTPs, where wastewater is disinfected with chlorine, the chlorinated triclosan derivatives undergo photochemical transformation to form di-, tri-, and tetrachlorinated dioxins that accumulate in downstream sediments.5

The DBP formation potential from disinfection is only part of the challenge of chlorine. From 1965 through 2007, 788 railcars were involved in accidents with 11 instances of catastrophic loss (i.e., a loss of all, or nearly all) of the chlorine lading.6 While these losses resulted in only four fatalities, it is clear that additional federal regulations and programs under the U.S. Department of Homeland Security and the U.S. Department of Transportation will be implemented to address the security of chemical production, transportation, and use of chlorine.

Chlorine-associated DBPs and additional potential hazards from handling chlorine gas have prompted utilities to switch to UV disinfection. While UV disinfection eliminates formation of toxic DBPs, it also eliminates the beneficial chemical oxidation step that transforms endocrine-disrupting compounds (EDCs).7 The EDCs most often implicated in the feminization of fish — 17β-estradiol, 17a-ethinylestradiol, estrone, and nonylphenol8 — are transformed during chlorine disinfection.9 This unexpected consequence raises new challenges. Thus, some researchers call for more effective methods of removing DBP precursors and applying disinfectants other than chlorine. However, to avoid DBP formation, while still disinfecting and removing EDCs, a disinfectant with oxidizing capacity will be required. Ozone can meet these needs from a process standpoint, but challenges of high capital costs, even in light of advances in ozone generation technologies, can make implementation of this technology for wastewater disinfection unfeasible.

An Alternative Disinfectant
Peroxyacetic acid or peracetic acid (PAA) is a chemical gaining a great deal of interest due to its ability to provide bacterial inactivation performance at costs competitive with other mature disinfection technologies. PAA is a chemical oxidant that has been applied to the food, beverage, medical, and pharmaceutical industries as a disinfectant for many years; and, because of its oxidizing power, it can address at least some constituents of emerging concern. PAA has the chemical formula CH3CO3H and is produced as an equilibrium solution as shown in Figure 1. Commercial preparation includes reacting acetic acid with hydrogen peroxide in the presence of a catalyst; specific grades of PAA are formulated by controlling the concentration and amounts of reagents during the manufacturing process.

Figure 1. PAA is commercially available in an equilibrium solution

The oxidation potential of PAA is higher than other chemicals used in water and wastewater treatment, nearly as high as ozone (Figure 2), which accounts for its ability to both disinfect and oxidize organic chemicals. Because of its reactivity, PAA does not persist in the environment and breaks down into acetic acid (vinegar) and hydrogen peroxide, which subsequently decomposes to oxygen and water. This is an important consideration in selection of a PAA product for wastewater applications, because each formulation introduces a slightly different amount of acetic acid (Table 1), which has an associated biological oxygen demand (BOD) for each mg/L of PAA dosed. Peracetic acid, hydrogen peroxide, and acetic acid have low octanol-water partition coefficients (KOW) (0.3, 0.4, and 0.68, respectively) and low sediment adsorption coefficients, so bioaccumulation in aquatic organisms or in sediments is highly unlikely.

In addition to the facts that PAA does not produce halogenated DBPs and has low aquatic toxicity relative to chlorine, its use on-site does not require special risk management plans (RMPs), as required by the EPA when handling certain toxic chemicals.

According to the Code of Federal Regulations, if “the partial pressure of the regulated substance in the mixture (solution) under handling or storage conditions in any portion of the process is less than 10 millimeters of mercury (mm Hg), the amount of the substance in the mixture in that portion of the process need not be considered when determining whether more than a threshold quantity is present at a stationary source.”

The commercial products used for wastewater disinfection have low vapor pressures of PAA in the mixture, and PAA may be excluded from the RMP; facilities are required only to adhere to the general duty clause. This is similar to the requirements for the E2 regulations in Canada.

PAA Applications In Municipal Wastewater
PAA has been demonstrated to be an effective wastewater disinfectant over a wide range of effluent qualities, requiring low doses of chemical to achieve bacterial inactivation. PAA has fast kinetics, requiring short contact times for disinfection. Capital costs for retrofit of existing chlorine facilities are very low, and PAA is able to provide treatment for challenging effluent while meeting stringent limits for halogenated DBPs such as THMs, cyanide, and dioxins. There are a handful of fullscale installations that have been implemented where PAA was selected for its benefits; some of these facilities are listed here: 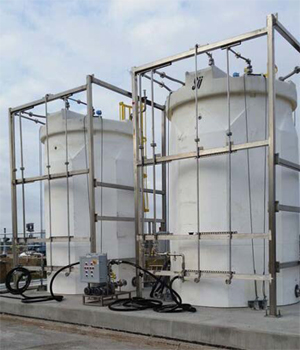 Further, the Stiles WWTP in Memphis, TN is currently under design for implementation of a PAA disinfection system after a full-scale study conducted in 2014 (Figure 3). This facility, when completed, will be the largest municipal PAA disinfection system globally, with a peak hour treatment capacity of 250 MGD, exceeding the capacity of the Nosedo WWTP in Milan, Italy with a capacity of approximately 110 MGD. Typical PAA installations are simple chemical storage tanks and pump skids, as shown in Figures 3 and 4.

Work To Be Done
This list of PAA installations in North America is not comprehensive, and there are a number of ongoing pilots that are providing scientific data to deepen the industry understanding of this technology. While the roles of factors such as suspended solids, temperature, pH, and other site-specific characteristics are important considerations in determining dosing requirements for various wastewater types, in general, results of studies are demonstrating that, for secondary effluent, initial design dosing is 1.5 to 2 mg/L of PAA. And with the fast disinfection kinetics of PAA, there are case study projects being implemented with peak flow contact times significantly shorter than what is required for achieving bacterial inactivation compliance for chlorine.

While PAA is seemingly a success story, PAA still faces a hurdle of limited use when compared to other more mature disinfection technologies such as chlorination, ozone, and UV disinfection. Though the EPA has approved four PAA products for use as a wastewater disinfectant, state regulatory agencies are 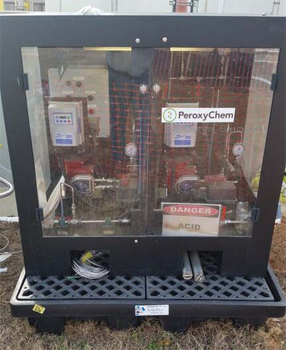 struggling with how to address permitting. Some of these challenges are related to the fact that the EPA has yet to publish an “approved” method for PAA monitoring in the Code of Federal Regulations. Even considering the EPA has approved registration labels on allowable residuals for discharge, the office that is responsible for environmental toxicity decisions is not necessarily coordinated with the Office of Wastewater, making it difficult for states to obtain technical support to implement PAA projects.

The information presented herein is intended to be a cursory overview of PAA disinfection. There is a tremendous amount of literature and experience with wastewater disinfection using PAA. To respond to the growing interest in this technology, it will be necessary to develop regulatory and design guidance to aid decision-makers in understanding the cost of compliance of using PAA as well as obtaining local regulatory support for implementation. Thus, when an individual facility is evaluating disinfection options, it is important to consider site-specific factors such as compliance goals, O&M (operations and maintenance), the willingness of a particular facility to take on risks associated with implementation of a new technology, and costs. If considering PAA for disinfection, utilities are advised to discuss this option with their consulting engineer, local regulatory authorities, and local PAA sales representatives to obtain more information on how this alternative compares to other mature disinfection technologies.

Dr. Kati Bell, PhD, PE, BCEE, is the Water Reuse Global Practice Leader for MWH Global. She is a registered engineer in four states with 20 years of experience in research, selection, design, and optimization of water/wastewater processes. Highlights of her work include chairing the recently published WEF/IUVA Ultraviolet Disinfection Wastewater, as well as directing over 2 BGD of disinfection projects.

Varsha Wylie is a Project Technical Lead for MWH Global. She is a process engineer with 13 years of international experience in the water industry. She has a strong design-build background and has designed and commissioned a number of water/wastewater treatment facilities in the UK and the U.S.