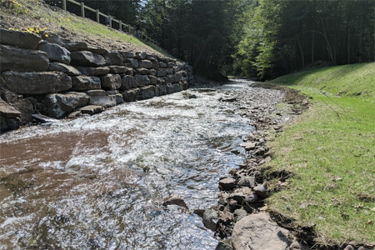 Matthew Krzyston grew up in the Village of Delhi, a rural community located in Delaware County, New York.

“I grew up half a mile downstream from Reservoir Park. As a young kid, my parents would take me there to picnic and play in Steele Brook. It was a special place that people of all ages loved to visit. However, during storm events, extreme eroding of the streambanks caused trees and clay sediment to fall into the stream. This created flooding in the village and made it impossible to even enter the park and it was basically forgotten.”

Four decades later, Krzyston is part of a team of people that helped to change this. Today he’s a Member of Council with the Town of Delhi and a member of Delhi's Joint Flood Mitigation Committee. The committee with the help of the U.S. Army Corps of Engineers, New York District, restored Steele Brook’s banks and as a result, there is less flooding, improved water quality, and it’s giving new life to Reservoir Park.

“Now the park is more accessible and more beautiful than it ever was before. I was excited to bring my boys — ages 13 and 15 — back to the same park where my parents had brought me. When we entered, they were amazed that they had never seen this hidden gem that is right up the road. My youngest looked around and said it felt like we were in a National Park. We will be retuning often,” said Krzyston.

A watershed is an area of land that catches rain and snow that drains or seeps into a marsh, stream, river, lake, or groundwater. This water eventually gets stored in reservoirs, a place where water is collected and kept for use when wanted, such as to supply a city.

If a streambank is eroding and trees and clay sediment are falling down the streambank and into the waterway, this can reduce the quality of the water that will eventually become the public’s drinking water and it can also cause flooding.

A portion of Steele Brook’s streambank was showing a great deal of erosion. During storm events, trees and clay sediment washed down from the banks, into the stream, and down the waterway. This debris got lodged under bridges within the village causing the water to over top and cause extreme flooding for the residents and businesses, impacting a population of approximately 3,100.

Krzyston said, “I witnessed flooding within the Village, stemming from Steele Brook, on two occasions. Two important bridges were almost completely blocked with woody debris that had eroded from the riverbank. Floodwater jumped the banks, flowed down main street, and entered residential, businesses, and municipal properties. Municipal workers and local businesses took emergency action, using heavy equipment to remove the woody debris that was blocking the bridges. This action allowed Steele Brook to pass under the bridges and water levels to subside back within the river’s banks.”

The streambank stabilization work included clearing the falling trees and debris from the 632-foot-long Steele Brook and its 21-foot-high slopes to stabilize the streambanks.

Along the edges of the stream, loose stones were placed. The stones slow down the stream and reduce potential damages downstream.

Also, along the stream border, a stacked rock wall was built. This was done to prevent sediment from running off the slopes into the stream during storm events.

Above the stacked rock wall, 8, 414 feet of the bank that was eroding was revegetated with native plants including native willow live stakes.

Graydon Dutcher, stream program coordinator with the Delaware County Soil and Water Conservation District said, “The plant's roots stabilize the soil and prevent the soil from running into the river. The vegetation also traps and absorbs sediment and pollutants, like harmful phosphorus and nitrogen particles, from entering the stream.”

These pollutants can come from nearby roads. Dutcher said, “When streambanks are eroded, it makes it easier for soil and pollutants to travel from roads to bodies of water. During storm events, water on roads can sweep up contaminants and transport them to bodies of water, such as a stream, adversely affecting the water that will eventually become a part of the water supply. Now with the newly planted vegetation, the flood water will drain from the road and filter through this vegetation before entering the stream.”

Another way to prevent pollutants from traveling from roads to the stream is by making sure there is a healthy floodplain. The stream was realigned to include a floodplain. A floodplain is an area of low-lying ground that is adjacent to the stream that keeps a river clean by filtering the water that runs from roads into the stream and absorbing pollutants before they enter the stream. Floodplains also provide space for water to spread out and slow down during big storm events. Because of Steele Brook’s steep side slopes, there was little to no floodplain, so the water ran straight into the stream without getting filtered.

Preventing sediment from entering the stream is not only beneficial to the public’s water supply, but also to aquatic habitats.  Clay sediment can reduce oxygen in the water suffocating aquatic wildlife.

To further protect aquatic habitats, a mixture of deep and shallow water depths was created in the stream to support different types of fish and invertebrate life.

Deep water — or pools — were created. Pools have slow moving water that are favorite places for certain species of fish, such as Trout, to hang out.

Shallow water — or riffles — were created. Riffles are faster moving sections of a steam, where rocks break the water surface. When the water rushes over the rocks it adds oxygen to the water. These are good places for certain insects to live.

In addition, this project has given the public access to Reservoir Park once again and the village is encouraging visitors. According to the Mayor of Delhi, picnic tables and grills will be placed in Reservoir Park to encourage not only locals to enjoy the area, but also visitors from New York City.

Krzyston added, “The flood commission members are very grateful to the Army Corps for the role they played in this project. I considered this to be an emergency. We have the local know-how and energy to address these types of emergency situations. However, it is very difficult — sometimes even impossible — to implement these projects without support from the Army Corps. While the project was designed to ensure public safety, the social and recreational benefits to the local population are immeasurable. There will be many family memories made at Reservoir Park.”

The land includes three watershed systems — The Catskill, Delaware, and Croton Systems — that are located in the counties of Greene, Schoharie, Ulster, Sullivan, Westchester, Putnam, Dutchess, and Delaware.

A watershed is an area of land that catches rain and snow that drains or seeps into a marsh, stream, river, lake, or groundwater.

This water eventually gets stored in reservoirs, a place where water is collected and kept for use when wanted, such as to supply a city.

New York City makes sure that this water is safe by treating it at the source rather than building a costly filtration plant. The source is the land that surrounds the streams, rivers, lakes, and reservoirs.

"In 1996, all of the municipalities in the New York City watershed region came to an agreement. They wanted to avoid the creation of a huge filtration plant.  Instead of a plant they agreed to have small projects throughout the region to provide the public with clean water with minimal filtration. This is how our New York City Watershed Environmental Assistance Program came about," said Rifat Salim, project manager, New York District, U.S. Army Corps of Engineers.

Dr. JoAnne Castagna is a Public Affairs Specialist and Writer for the U.S. Army Corps of Engineers, New York District.  She can be reached at joanne.castagna@usace.army.mil.