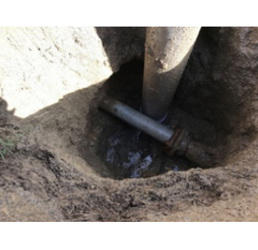 The Water and Sewer Corporation in Arlington, Texas, is responsible for 1,440 miles of water pipes serving more than 398,112 residents. In the past few years, Arlington has made significant improvements to limit water loss due to main breaks and unauthorized consumption. The water loss dropped from 12.75% in 2014 to 8.25 %in 2019.

Ric Owens, Water Conservation Specialist in Arlington Water Department, has been working with Aquarius’ leak detection technology for several years. Using only 20 AQS fixed acoustic sensors in different locations (“Lift & Shift”), Ric has managed to detect many underground hidden leaks - From initial phases of their development (as small as .5 GPM) till the biggest ones.

During May 2020 the Utility Installed few of Aquarius fix acoustic sensors and short time after the installation the system indicated a point of interest (POI) at around the four-way tee at Green Apple and Legend. This POI was accurately presented on the Utility’s GIS map. In addition to the AQS-SYS automatic investigation of POIs, the leak detection team downloaded the sound files recorded by the sensors and listened to them to verify it’s not “false positive”. Then, the team went out to the site and located the leak physically at roughly 4-5 feet from the tee on the 4” PVC pipe.

One of the unique features of this particular detection was that the Aquarius’ accelerometers sensors were installed on metal piping while the leak was found on a PVC pipe. The system showed a suspected leak at about 4 feet distance from the exact location where it was located. This allowed the local staff to locate it in a short and fast process and without the need to carry out unnecessary excavations.

The leak found was medium-sized 5 GPM (see figure 2). If the leak would have continued to develop and running for about a year till going up surface, it would have produced a loss of about 2,628,000 gallons that worth $3,942. The real savings are far beyond to the water saving and NRW reducing. Early locating of the leak and its repair while underground, prevented the environmental damage and much higher repair costs that would have been caused due to severe defect in the pipe and especially when it comes to burst.

Satisfied with the system, Ric Owens says that, “These sensors pick up a .5 GPM leak at the distances we have on these normal couplings at several hundred feet apart. That is incredible. I have found 15-20 private leaks insides houses from toilets and others. In most of those cases the meter didn’t pick up the flow. So far, we have not had an issue that I gave to our crew from this system that wasn’t correct within 6 ft.”