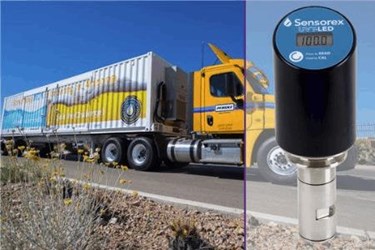 Sensorex has donated two UVT-LED UV transmittance monitors that were deployed in a mobile water treatment center. The monitors are part of the AZ Pure Water Brew Challenge–an inspired public education campaign to raise awareness of water reuse through a craft brewing competition. The UVT-LEDs are used to measure water quality of incoming wastewater and again near the end of the process to validate readiness for disinfection.

The Pure Water Brew Challenge (www.azpurewaterbrew.org) is the brainchild of the Pima County Southwest Water Campus, made possible by over $300,000 in funding it earned as a result of winning the New Arizona Prize: Water Innovation Challenge in 2016. That challenge awards funding to the best solution designed to advance the sustainability of Arizona’s water future. As the team started to make their concept of a mobile water treatment plant a reality, they turned to Sensorex for help measuring key process parameters.

Sensorex’s UVT-LED delivers fast, accurate, UV transmittance readings for water treatment applications where UV disinfection is used. With proper UV dosing adjustment, based on UVT values, fluctuations in organic content can be accounted for and UV disinfection energy efficiency is increased. The UVT-LED is available in online and portable models.

Sensorex provided both models to the Pure Water Brew team. The online UVT-LED was mounted directly into the water pipe prior to the UV/oxidation step, taking automatic measurements every 60 seconds. Readings were directly output via a 4-20mA signal for UV system control and data logging. 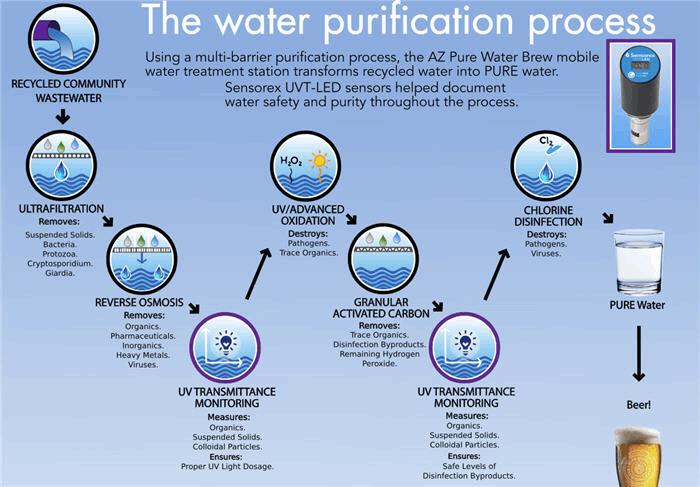 The portable model was used prior to chlorination, along with total organic carbon analysis, to evaluate the potential for the formation of disinfection byproducts. The handheld monitor takes measurements at the single push of a button, with readings instantly displayed clearly on the backlit LED display. By confirming with the UVT-LED that the organic content of the water was low, the Pure Water Brew team could confidentially proceed with the chlorine disinfection.

The Pure Water Brew team found the UVT-LED instruments “straightforward and simple to operate,” according to team Research & Innovation Leader, Jeff Prevatt. He continued, “The Sensorex UVT-LED monitors were an important tool in helping to validate and document exceptional water quality we achieved throughout the process.”

For the Brew Challenge, each of the 26 participating breweries was allocated enough fully treated water from the mobile plant to brew a batch of beer for the challenge judges and public tastings. In all, more than 80,000 gallons of recycled community wastewater were treated in the mobile plant. Winners were awarded and public tastings were held September 10th, at the 32nd WateReuse Symposium in Phoenix, Ariz. Dragoon Brewing Company of Tucson, Ariz. emerged victorious with their Clear Water Pilsner.

Both UVT-LED models require zero warm up time. The online version’s patented cleaning and calibration feature ensures reliability and prevents fouling and build-up. An integrated wiper delivers a swift cleaning cycle before each reading is taken. The portable model is the industry’s only truly handheld UVT instrument. With low battery consumption, it is capable of up to 350 readings on a single charge.