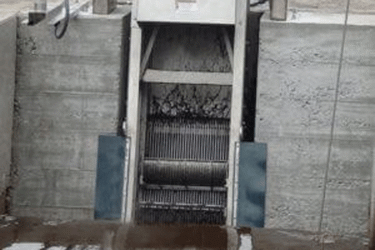 A commercial mushroom composting company in Pennsylvania needed help with a problem in their compost production process. The compost, made from hay, straw, horse manure, chicken litter, corn cobs and more, is processed on an eight-acre concrete slab, also called a wharf. The runoff from the rain and water used during the compost process washes off the wharf and into a pit and then travels through a pipe that carries it to the two-million gallon lagoon behind the wharf. From there, the company recycles the water by pumping it back to begin the process again. Unfortunately, the process wasn’t as smooth as they had hoped. Sediment and pieces of the organic material were continuously washing down into the pit and traveling to the lagoons, causing major clogs. This presented a serious issue for the company as it was slowing down their process, causing downtime, and making a mess of their lagoons. That’s when they contacted Franklin Miller for a solution.