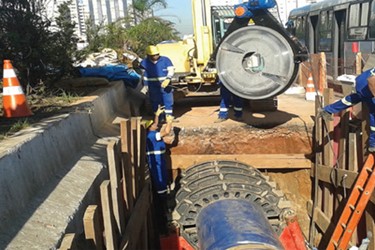 Sabesp supplies water to more than half of the municipalities in the state of São Paulo, Brazil, including the 20 million residents of the metropolitan region of São Paulo. When a 16-month dry spell threatened the water supply from the Cantareira basin, the metro area’s main water source, Sabesp acted quickly to avoid water rationing that would be both unpopular and economically devastating. Using WaterGEMS to assemble and calibrate a hydraulic model of the entire water network, Sabesp evaluated 80 what-if scenarios before selecting an alternative that capitalized on the interconnection between producer systems. The solution allowed water to be transferred into the Cantareira system with minimal adjustments to infrastructure. Sabesp estimated that it took 50 percent less time to fi nd a solution by modeling with WaterGEMS, the shortest hydraulic solution time the team of engineers and modeling specialists ever experienced.