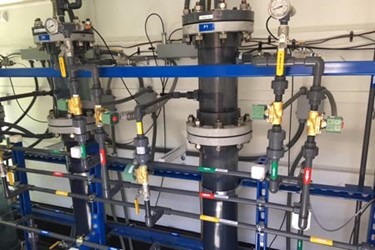 Water from Well 19 and 20 in Sacramento, California area was high in manganese and arsenic. Due to the high levels, the wells were not being used to supply municipal water to the District. Each facility is planned to initially produce and treat approximately 600 gpm with a future expansion capacity to 1200 gpm.

This pilot study was conducted to provide competing manufacturers an opportunity to demonstrate the effectiveness of their products, so that they may be considered as suppliers for a future public bid. It was undertaken to demonstrate the effectiveness of water treatment products that employ oxidation and filtration to remove iron, manganese and arsenic to levels well below MCL’s.