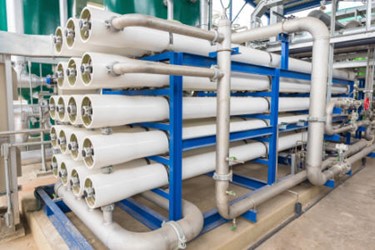 Seawater desalination is unequivocally the future of drinking water production for coastal communities and island nations in current times of water scarcity. It is already used quite heavily in a few countries. Saudi Arabia, the United Arab Emirates, and the U.S. are the top three desalination producers of drinking water by capacity in the world, followed by Australia, China, and Kuwait.

These countries benefit from desalination systems because they have particularly dry climates with few freshwater sources, or they require an expansion of water resources above their existing water sources available.

The end goal of a desalination process is the removal of the salts present in seawater which are concentrated at about 3 to 3.5 percent. There are also other constituents in seawater that would need to be handled as well, like color, silica, and microorganisms. To do this, the process begins by drawing ocean water via an intake pump from a beach well or from an intake pipe buried on the seafloor. This water enters into an equalization tank or basin.

From this process, the water undergoes pretreatment. The pretreatment consists of usually one or more filtration units that remove particles larger than 1 nanometer. This pretreatment process is very important, to reduce the risk of RO membrane fouling.

In RO operation, pressure is applied to overcome osmotic pressure. Therefore, water flows through the membrane to an area with a lower salt concentration, leaving the salts to flow through into a concentrated solution (brine). The resulting clean water is put through a post treatment process which includes remineralization and residual disinfection. Finally, the brine concentrate produced is carefully discharged back into the ocean in a dispersive way. This discharge process is engineered and designed to significant reduce any negative impact on the local marine ecosystem.

Using seawater desalination RO treatment systems, coastal communities and island nations can achieve clean and safe water. So why do some countries utilize this advanced treatment technology, while others do not?

Let’s look at some of the pros and cons of reverse osmosis seawater desalination for drinking water.

Modular systems are designed to be compact and easy to move and install in order to reduce capital costs. They are great for municipal or commercial drinking water applications (such as hotels) where space may be limited, but they need to provide for a large number of people.

The driving force behind desalination. Being more sustainably minded about the state of our current water sources is important, but alternatives are also essential when they are available. The ocean just so happens to be a very big alternative. With the world’s oceans as a viable source for drinking water, that would expand humanity’s most valuable resource by an exponential margin. Keep in mind that the oceans account for about 95+ percent of all the water on Earth.

The only other currently used desalination treatment is of the thermal variety. It works the same way as the water cycle, evaporating water into steam and when it is condensed it provides clean water. This approach is very effective at removing unwanted particles, but collecting and condensing steam is inefficient and produces much lower yields of pure water than RO. For the same output volume of water, thermal processes would require nearly three times as much seawater.

After reverse osmosis, the water is so pure we actually have to put minerals back into it. The process remove the minerals of water that humans need as well as the tastes we are familiar with. Therefore, the post remineralization process takes care of this and regulates pH.

Reverse osmosis membranes are very sensitive. So, unless some more resistant membrane material is developed, pretreatment is an important requirement. Without it, the membrane can become practically useless, decreasing yield or producing impure water. Improperly pretreated seawater can deposit particulate matter on the membrane. These contaminants affect proper membrane flow and pressure which increases operating cost.

Reverse osmosis systems are constant flow processes so fluids are constantly being pumped and pressure is continually being applied to the cylindrical membrane vessels. The pressure required can approach up to 1000 psi (69 bar) in some systems. However, the osmotic pressure energy stored in the concentrate solution can actually be recovered to reduce the overall energy costs. A commonly used technology is the rotary pressure exchanger. Influent seawater is pressurized by pistons within channels inside the exchanger that are depressed by the high-pressure concentrate reject stream from the RO unit. This reuse of kinetic energy from the brine water can reduce the energy cost efficiently.

Can Be Costly for Developing Nations

Regardless of any energy saving, many nations of the world don’t have the capability or resources to construct and operate desalination projects. The drinking water produced from the seawater desalination process is typically more expensive than treated ground water, brackish water or surface water sources.