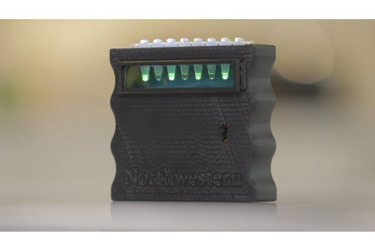 A new platform technology can assess water safety and quality with just a single drop and a few minutes.

Likened to a pregnancy test, the handheld platform uses one sample to provide an easy-to-read positive or negative result. When the test detects a contaminant exceeding the EPA’s standards, it glows green.

Led by researchers at Northwestern University, the tests can sense 17 different contaminants, including toxic metals such as lead and copper, pharmaceuticals, cosmetics and cleaning products. The platform — which is powered by cell-free synthetic biology — is so flexible that researchers can continually update it to sense more pollutants.

Current water tests rely on a centralized laboratory that contains really expensive equipment and requires expertise to operate,” said Northwestern’s Julius Lucks, who led the study. “Sending in a sample can cost up to $150 and take several weeks to get results. We’re offering a technology that enables anyone to directly test their own water and know if they have contamination within minutes. It’s so simple to use that we can put it into the hands of the people who need it most.”

The research was published today (July 6) in the journal Nature Biotechnology. Lucks is a professor of chemical and biological engineering in Northwestern’s McCormick School of Engineering and a member of the Center for Synthetic Biology. Jaeyoung Jung and Khalid Alam, members of Lucks’ laboratory, are co-first authors of the paper.

In cell-free synthetic biology, researchers take the molecular machinery — including DNA, RNA and proteins — out of cells, and then reprogram that machinery to perform new tasks. The idea is akin to opening the hood of the car and removing the engine, which allows researchers to use the engine for different purposes, free from the constraints of the car. In this case, Lucks’ team used molecular machinery from bacterial cells.

“We found out how bacteria naturally taste things in their water,” Lucks added. “They do so with little molecular-level ‘taste buds’. Cell-free synthetic biology allows us to take those little molecular taste buds out and put them into a test tube. We can then ‘re-wire’ them up to produce a visual signal. It glows to let the user quickly and easily see if there’s a contaminant in their water.”

These reprogramed “taste buds” are freeze-dried to become shelf-stable and put into test tubes. Adding a drop of water to the tube — and then flicking it — sets off a chemical reaction that causes the freeze-dried pellet to glow in the presence of a contaminant.

“The magic is in the tubes,” Lucks said. “We compose everything and freeze dry it — the same process as making astronaut ice cream.”

Inspired by women in science
Lucks and his team call this testing platform “RNA output sensors activated by ligand induction.” But his team has nicknamed it ROSALIND for short, in honor of famed chemist Rosalind Franklin, who discovered the DNA double helix alongside James Watson and Francis Crick. Franklin’s 100th birthday would have been later this month (July 25).

“Her work essentially eventually enabled us to learn how to reprogram DNA to act in our technology,” Lucks said.

When starting this project, Lucks took inspiration from another woman scientist in his life: his wife, Northwestern anthropologist Sera Young, who studies global food and water security and the role of household water insecurity in societal well-being.

“Sera researches how poor water quality impacts people’s daily lives,” Lucks said. “People tend to go to the most convenient sources to get water. But if they knew that water was contaminated, they might choose to travel farther to find safer water. We want everyone to have the tools they need in order to make informed decisions.”

ROSALIND in Paradise
To test the new platform in the field, Lucks, Jung, Alam and fellow Northwestern professor Jean-Francois Gaillard visited Paradise, California at the end of last year. One year earlier, a string of massive wildfires obliterated the northern California town, destroying nearly 19,000 buildings and displacing most of its population. Gaillard, a professor of environmental engineering, is an expert in the biogeochemical processes that affect metals in the aquatic system.

“Wildfires basically melted the town,” Lucks said. “They burned down buildings and melted cars that released toxic metals into the environment.”

Lucks, Gaillard and their teams tested ROSALIND alongside gold-standard water tests and discovered that ROSALIND was able to identify the presence of elevated toxic metals in the water supply. It also provided much faster and less expensive results.

Lucks and his team envision that ROSALIND could help recovery efforts like the one in Paradise, in which residents needed to perform tens of thousands of tests in order to know if their community was safe to re-enter.

“Laboratory testing doesn’t scale,” Alam said. “It shouldn’t take days to get an answer to the simple question: ‘Is my water safe to drink?’”

Difficulties of testing at home
Disasters, of course, aren’t the only causes of unsafe water. Heavy metals, such as copper and lead, that are naturally found in the environment can leech into pipes, contaminating household water taps and school drinking fountains. Personal care products, such as sunscreens and lotions, wash off people’s skin and end up in waterways. Unused pharmaceuticals and agricultural herbicides, too, run off into our water and end up in our sinks.

But, unless we can directly — and regularly — test for these pollutants, there’s no way to maintain a peace of mind.

When testing water in their own home in Evanston, Illinois, Lucks and Young noted several difficulties. Consuming high levels of copper over many months or years can lead to liver damage and even death. With this concern, Lucks decided to check the copper levels in their household water. It cost $150 and took a month to receive the results.

“This is a one-time test,” Lucks said. “It doesn’t allow for checking levels from different taps in the house or temporal testing over time.”

Testing for lead wasn’t much easier. Lead-testing kits are available at most hardware stores. But after filling a tube with water, it still must be mailed to a centralized facility. It still costs up to $150 per test and takes weeks for results. And if people want to check their water for other contaminants, such as antibiotics, tests simply do not exist for consumers.

“There has been a lot of advances in developing point-of-use diagnostics for monitoring pathogens,” Jung said. “But not nearly enough effort for detecting chemical contaminants.”

“To ensure access to safe and clean drinking water, we need technologies that will allow easy monitoring of water quality,” Lucks said. “With a simple, easy-to-use, handheld device like ROSALIND, you can test the water in your home or out in the field — where you would want to use it most.”

The research, “Cell-free biosensors for rapid detection of water contaminants,” was supported by the National Science Foundation (award numbers 1452441 and 1929912), the National Institutes of Health (award number R35 GM118157), the Crown Family Center for Jewish and Israel Studies at Northwestern University and Searle Funds at The Chicago Community Trust.