Polluted Wastewater In The Forecast? Try A Solar Umbrella 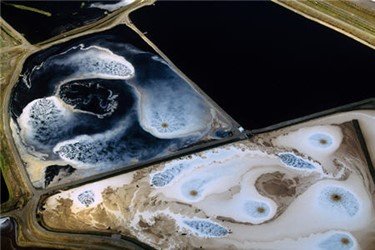 Evaporation ponds, which are commonly used in many industries to manage wastewater, can span acres, occupying a large footprint and often posing risks to birds and other wildlife. Yet they’re an economical way to deal with contaminated water because they take advantage of natural evaporation under sunlight to reduce large volumes of dirty water to much smaller volumes of solid waste.

Now researchers at the Department of Energy’s Lawrence Berkeley National Laboratory (Berkeley Lab) have demonstrated a way to double the rate of evaporation by using solar energy and taking advantage of water’s inherent properties. The study, led by Berkeley Lab scientists Akanksha Menon and Ravi Prasher, is reported today in the journal Nature Sustainability.

Evaporation ponds are used at power plants, desalination plants, in the oil and gas industry, and also for lithium extraction, in which lithium-rich brine is pumped into vast, man-made salt ponds. They’re common in China, Australia, Europe, the Middle East, and parts of the United States where the climate is suitable (arid or semi-arid with a lot of sunshine), and these ponds can be the size of hundreds of football fields, with many of them sitting side by side.

“This is a big societal problem we’re trying to solve. To either dispose of the wastewater or to extract a valuable salt like lithium, you would like to increase the evaporation rate dramatically and in a scalable manner,” said Prasher, an expert in thermal energy who also serves as Berkeley Lab’s associate director for the Energy Technologies Area. “If we could do so, that could reduce their environmental impact by reducing the amount of land required.”

To maximize water recovery from industrial wastewater and desalination brine, there has been a push to achieve “zero liquid discharge” so that the final waste is a solid. The process involves a series of treatment steps, and the last step is frequently an evaporation pond. Menon, a Berkeley Lab postdoctoral fellow, notes that many ideas have been proposed to use solar energy to speed up the rate of evaporation.

“There have been several papers published in the last five years,” she said. “Most involve sunlight-absorbing structures that float on the water’s surface, like a black sponge, to localize the heat, since evaporation is a surface phenomenon.”

Unfortunately such porous structures tend to get clogged up with the very contaminants that they’re trying to separate. “So over time, the performance of the floating absorbers drops dramatically,” Menon said. “Sometimes the salts will get stuck on the surface and will reflect sunlight rather than absorbing it.”

Transforming the wavelength of sunlight
The Berkeley Lab researchers looked for a solution that could avoid such issues. “We realized if you look at the properties of water, it has very strong absorption in the mid-infrared wavelength range,” Menon said. “If you shine mid-infrared light on water, it’ll absorb it so strongly it retains all of that heat in a very thin layer.”

The team decided to build a device they liken to a “radiation transformer,” which takes energy from sunlight in the range of 400 to 1,500 nanometers and converts it to 3,000 nanometers or greater, which is in the mid-infrared range.

The Berkeley Lab scientists demonstrated the concept in the lab using a saturated solution of table salt. In their experiment, their prototype device enhanced the evaporation rate by more than 100% over natural evaporation. They add that there is the potential to increase evaporation by 160% by optimizing the thermal design.

Their photo-thermal device – a flat sheet that selectively absorbs solar energy on one side and emits mid-infrared energy on the other – sits above the water in an evaporation pond like an umbrella. “A site may have an array of these solar umbrellas, likely sitting on tent posts, about a foot or so above the water,” said Menon.

The researchers noted that such solar umbrellas could also play a role in desalination plants, which are emerging as a solution for growing water demand around the world, but disposal of the by-product – concentrated brine – remains a problem. Berkeley Lab leads the National Alliance for Water Innovation (NAWI), which was awarded the $100-million Energy-Water Desalination Hub by DOE earlier this year.

“If you’re going to do large-scale desalination, one of the biggest challenges is how to come up with scalable technologies,” Prasher said. “This is potentially is a highly scalable zero-liquid discharge technology, which doesn’t require any energy because it’s based on solar energy.”

Prasher said the team next wants to pursue two directions. The first is to do a techno-economic analysis for both lithium extraction and zero-liquid discharge for desalination plants to better understand the costs. The second is to look at making the device out of a polymer or other material to further reduce the cost.

About Lawrence Berkeley National Laboratory
Founded in 1931 on the belief that the biggest scientific challenges are best addressed by teams, Lawrence Berkeley National Laboratory and its scientists have been recognized with 13 Nobel Prizes. Today, Berkeley Lab researchers develop sustainable energy and environmental solutions, create useful new materials, advance the frontiers of computing, and probe the mysteries of life, matter, and the universe. Scientists from around the world rely on the Lab’s facilities for their own discovery science. Berkeley Lab is a multiprogram national laboratory, managed by the University of California for the U.S. Department of Energy’s Office of Science.

DOE’s Office of Science is the single largest supporter of basic research in the physical sciences in the United States, and is working to address some of the most pressing challenges of our time. For more information, visit energy.gov/science.