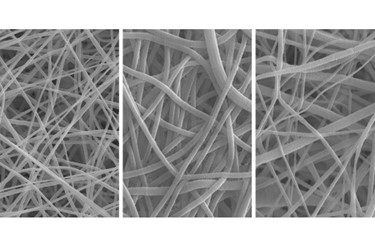 As concerns about water droughts and shortages continue to grow, so does the attraction to use treated wastewater to supplement water supply.

But while traditional wastewater treatment processes remove pollutants using biological treatment and gravity separation processes, more work is needed to improve the water quality so it can be reused. For this, nanofiber membranes are used, which feature pores smaller in diameter than most bacterial cells. However, as pollutant particles and microbes used in the water treatment process build up on the surface of the membrane, more energy is needed to pump water through it.

Researchers at USC Viterbi School of Engineering are developing a new way to combat membrane build up, known as “fouling,”. Through an electrical stimulation of nanofiber membranes, Assistant Professor Adam Smith, Ph.D. student Stephanie Gee and USC Viterbi alumnus Benjamin Johnson (B.S. Physics ’16), are able to reduce fouling and lower the pressure needed to push water through. This method could lower water treatment energy use and associated costs.

“We’re applying an electrical field to make the membrane itself vibrate,” Smith said, who teaches in the Sonny Astani Department of Civil and Environmental Engineering. “The vibration then repels the microbial biomass and particulates that is potentially going to clog or foul the membrane.”

In contrast to conventional filtration methods, such as granular activated carbon columns or rapid sand filtration, a nanofiber membrane has smaller pores that better reject particulates. Over time, the volume of particles collected on the membrane surface grows, obstructing water from passing through. This makes the pump work harder to generate enough pressure to push the water through the membrane, therefore consuming more energy.

Current clearing methods include cleaning or replacing the membrane, which can be expensive, or through “sparging,” a process in which gas is bubbled across the membrane to dislodge the particulates. Smith and Gee offer a new solution – electrically stimulating the membrane to create a vibration-like response that inhibits particles from attaching or clogging the pores.

The membrane, which is made out of a polymer called polyvinylidene fluoride or PVDF, is manufactured through an electrospinning process in which a polymer solution is pumped through a needle and exposed to a high voltage power supply.

“When you electrospin PVDF under a high voltage electric field, it switches from the stable crystalline phase of PDVF to the electroactive beta phase,” Smith said.

Materials with electroactive, or piezoelectric, properties have been used to generate an electric charge when a mechanical force is applied. But the USC Viterbi researchers are using it in reverse. When an alternating current is applied to their membrane, the membrane deforms.

“You can think of it as stretching and contracting,” said Gee who received a three-year National Science Foundation Graduate Research Fellowship in the spring of 2018. “That’s what occurs on the very small scale of the crystalline structure. But, overall, we suspect that the response can be thought of as vibrations because they’re all active together.”

To optimize the membrane, the researchers tested various electrospinning conditions, such as the strength of the electric field and the height of the syringe above the collector. They also tried different polymer solvents, comparing two commonly used solvents that are highly toxic to one that is less used but less hazardous.

They found that all three solvents reduced the pressure needed to pump water through the membrane when piezoelectrically activated. Their results were published in the Journal of Membrane Science on October 1. Further testing showed that, while the less hazardous material didn’t reduce the pressure as much as the other two, it was mechanically stronger than them both and could therefore be potentially better suited for long-term use.

While the researchers have a strong sense of the mechanisms behind their membrane’s fouling control, they are working towards a complete understanding to improve its function.

“We’re trying to investigate fundamentally what the activation looks like,” Gee said. “We want to get a better understanding of how it behaves to better understand the fouling prevention mechanism so we can optimize the membrane for water treatment processes.”