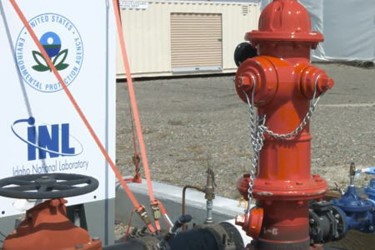 Onshore crude oil production has increased in the United States over the past few years. Oil producers, specifically the North Dakota Pipeline Authority and the Bakken Shale field producers are transporting crude oil by rail and train to both the East and West Coast oil refineries. While rail tends to be one of the safer and more efficient ways of transporting crude oil, there is still a risk of a spill. Oil spills are threats to both ground and surface waters, which can ultimately impact drinking water.

Decontamination of drinking water systems following crude oil contamination is critical for the effective return of the system to operation and for restoring public confidence in the safety of the water distribution system for drinking and other uses. States, tribes, and local communities need the ability to reliably and cost-effectively decontaminate miles of distribution system pipes and premise plumbing. This is a critical capability that utilities will need to ensure public safety and confidence in their drinking water following an incident.

EPA researchers recently examined the effectiveness of flushing crude oil, or Bakken oil, to remove any persistent oil fractions in the pipeline, appliances, and premise plumbing at EPA’s water security test bed at the Idaho National Laboratory facility. This simulated distribution system allows researchers to test contaminants without any human health or ecological risk and inform water systems on effective methodologies tested in a real-world set-up, which improves the utility’s ability to respond to contamination incidents. For this research, the test pipe was contaminated with the soluble fraction of Bakken crude oil that had been in contact with local river water for 12 hours. This was meant to simulate an oil spill on a body of water. Decontamination was performed by first flushing with clean water, as would typically be done by a water utility. Following, the pipes were flushed with water and the addition of a surfactant.

“Data collected during this experiment suggest that flushing with clean water is enough to decontaminate the soluble fraction of Bakken Oil from the distribution pipes,” says EPA researcher, Jeff Szabo.

During the experiment, benzene spiked to a level higher than the maximum contaminant level (MCL) after contamination, but the clean water flushing quickly reduced benzene levels below the MCL to undetectable levels. No total petroleum hydrocarbons (TPH) or tolulene, ethylbenzene and xylene components were detected in the water.

A surfactant was injected because the researchers assumed that oily components would persist in the water phase or on the infrastructure surfaces, but the researchers determined that adding surfactant wasn’t necessary because clean water flushing was successful. There was persistent foaming noticeable in the system after using the surfactant and that should be taken into consideration if one is used during decontamination.

Similar results were observed for Bakken crude oil components and benzene in home plumbing pipes and appliances. Decontamination of the premise plumbing included flushing the cold water tap and refrigerator water for about 20 minutes, then the researchers drained the water heater, refilling and flushing the hot water plumbing for 20 minutes and then running each of the appliances for one cycle.

As in the full drinking water distribution system, benzene spiked above the MCL after contamination but fell below the MCL to pre-injection baseline levels after flushing. However, TPH, made up of gas range organics, oil range organics, and diesel range organics, was detected in the dishwasher and refrigerator water dispenser after flushing, which indicates that the soluble oil components may persist or concentrate on some of the materials in these appliances. Toluene, ethylbenzene, and xylene were also analyzed in the premise plumbing and any residual amounts were detected well below the drinking water MCLs.

Decontaminating drinking water systems is important to ensure systems return to normal operation following any type of contamination, regardless of the source. EPA researchers will continue to research the most effective and the most cost-effective ways to provide options for states, tribes, and local communities to ensure confidence in returning drinking water systems to normal operations.