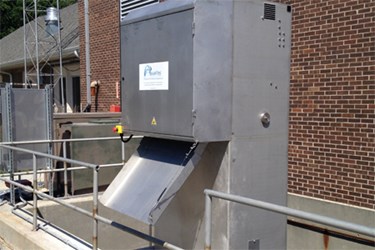 New Jersey's Lower Township Municipal Utilities Authority had a problem. The utilities authority operates a 5 MGD plant, with wastewater inflow arriving through a 48-in pipe routed 23 feet below grade level. Their manual inflow pump screening setup was difficult and hazardous to clean, and its 2.5" screen spacing let entirely too much non-dispersible waste through. Their 3,000 GPM non-clog pumps were constantly clogging, and workers were repeatedly exposed to a hazardous situation.

Each day, a crew of two to three workers had to descend a 26' stairwell into a dark, hazardous environment to manually remove accumulated debris from the screen. Scooping the refuse with gloved hands caused additional non-dispersible trash to fall through the large openings between screen bars, and workers had to haul heavy buckets full of debris up the steep, damp steps to a nearby dumpster. Hefting the heavy buckets overhead caused a number of strain injuries over the years, and hazardous hydrogen sulfide levels often necessitated expensive overtime work to clear the screens very early in the morning.