Drinking water safety has been in the news. A few years ago, the community of Flint, MI, struggled with lead contamination in its water supply. More recently, residents of Newark, NJ, experienced the same.

What doesn't always make the headlines are the good things that are occurring concerning the public's drinking water.

Ensuring that stream banks are fortified is important. If a streambank is eroding, soil and stormwater runoff — which may contain contaminants from nearby streets and land — can easily flow into the stream and adversely affect the water quality. These streams may eventually flow into reservoirs that supply fresh drinking water to the public.

In New York State, the Cannonsville and Pepacton Reservoirs are two of several reservoirs that provide billions of gallons of water to New York City.

Several streams that flow into these reservoirs were eroding until the Army Corps restored them under its New York City Watershed Environmental Assistance Program.

A watershed is an area of land that catches rain and snow that drains or seeps into a marsh, stream, river, lake, or groundwater. This water eventually gets stored in reservoirs, a place where water is collected and kept for use when wanted, such as to supply a city. (See the sidebar, New York City Watershed System.)

In the Town of Walton, the West Branch Delaware River flows near the village streets.

Bordering this river are 13 acres of floodplain that is actually part of the river. The purpose of a floodplain is to help keep a river clean and to give it space to spread out and slow down during big storm events.

Over the years, the floodplain was filled with 10’ of fill. This raised and hardened the land, killed natural vegetation, and caused invasive plant species to flourish. It also eroded the river's edge, causing soil and trees to fall into the water.

As a result, when the river floods, the water that would naturally be absorbed, filtered, and transported by the floodplain is unable to, so floodwaters back up and stay trapped on the village streets, flooding homes and businesses.

When this high volume of stormwater runoff floods the streets, it can sweep up contaminants and carry them to the West Branch Delaware River that flows into the Cannonsville Reservoir.

"Today, the floodplain is on its way to becoming healthy," said Graydon Dutcher, stream program coordinator with the Delaware County Soil and Water Conservation District. "The fill was removed and recycled."

Dutcher, who is also a Walton resident, added: "The residents of Walton were so happy about this work that they took it further. They used their own time and resources to remove the overgrown, invasive plants, such as knotweed."

The village and town also mowed and graded the land to the correct elevation and slope to allow water to spread out onto the floodplain, instead of overtopping the banks and flooding nearby businesses.

Afterwards, grass was planted on the floodplain and native vegetation and shrubs were planted along the river including a mix of Maple and Ash trees.

Dutcher said, "Now flood waters will drain from the town's streets, building rooftops, and parking lots and filter through the vegetation before entering the river."

The vegetation traps and absorbs sediment and pollutants, like harmful phosphorus and nitrogen particles, from entering the river. The plant's roots also stabilize the soil and prevent it from running into the river.

An added benefit of this project is that it will lessen the damages of flooding.

It will provide flood reductions for a 100-year storm event. This is a flood whose strength and water height is predicted to occur, on average, about once in 100 years. The project will also be useful for storms that happen more frequently.

Dutcher said, "The village is ecstatic. We have a clean slate here."

He said that the village's plans for the land are to create a small pocket park for the community that will include trails, walkways, athletic fields, and a boat launch. 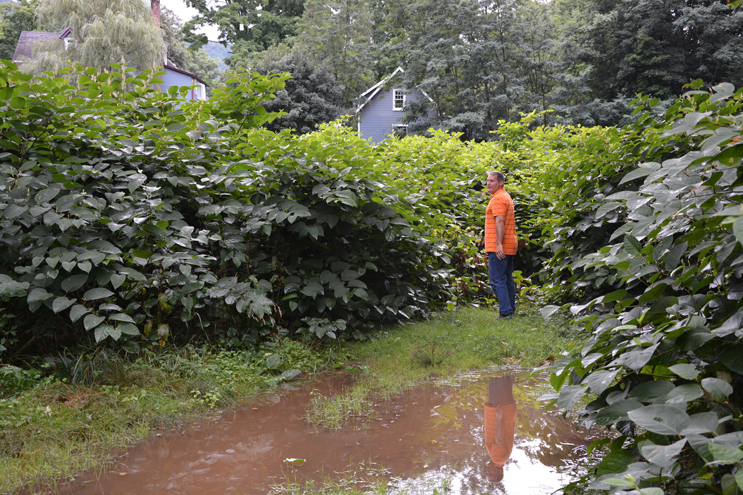 Before photo. Graydon Dutcher walking Army Corps personnel through the tall invasive plants on the Walton floodplain in the Town of Walton in 2016. (Credit: JoAnne Castagna, public affairs) 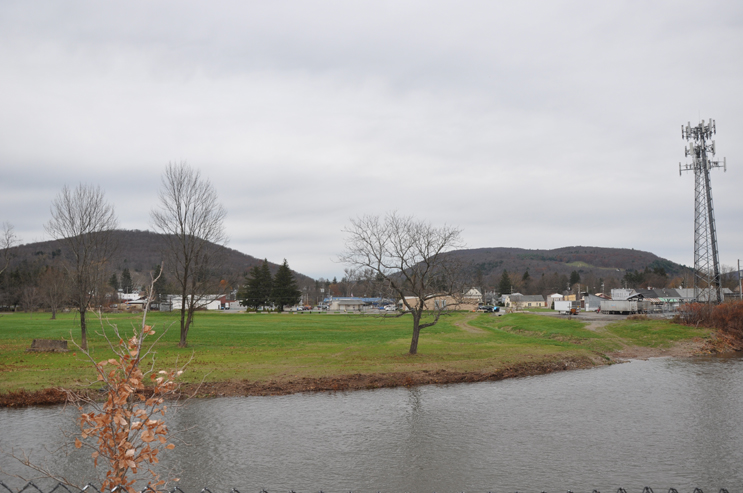 If you're standing on the restored Walton floodplain that was just discussed and look across to the other side of the West Branch Delaware River, you'll see South Street. The street sits high up on a bank that overlooks the river. This is where the South Street Bank Restoration Project is located.

Over the years, South Street, which is lined with a few houses, has been slowly eroding down into the river.

This has caused the river's edge to erode, causing trees and soil to fall into the water and has created tension cracks in the street's asphalt.

"Under South Street there are water, sewer, and gas lines," said Dutcher. "Under a flood condition, if the street continues to crack and shift down into the river, it could break the sewer line and the sewer would discharge into the river underground, contaminating the water — and we wouldn't even know it."

To stabilize the river's banks and prevent the street from continuing to shift down, 40’ steel sheet pile was installed along the bank that extends 30’ below ground.

Dutcher said, "If we didn't perform the sheet pile work, this whole area would have cleaved off. We really had to stabilize this bank using hard armoring, which is something we don't typically do, but in this case it was really needed."

To further stabilize the bank and control streambank erosion, loose stone was placed at the edge of the river. The stones slow down the stream along the sheet pile and reduce potential damages downstream.

Native vegetation was also planted near these stones and at the bottom area of the sheet pile. "We also plan on growing creeping vines along the top of the sheet pile, so it looks more natural when grown out," said Dutcher.

Stormwater runoff will filter through the vegetation before it enters the river. The vegetation will trap and absorbs sediment and pollutants, like harmful phosphorus and nitrogen particles, from entering the river. The plant's roots also stabilize the soil and prevent the soil from running into the river.

Recently, employees from the Army Corps were visiting South Street with Dutcher when a resident and former president of the Chamber of Commerce conveyed her thanks and appreciation. 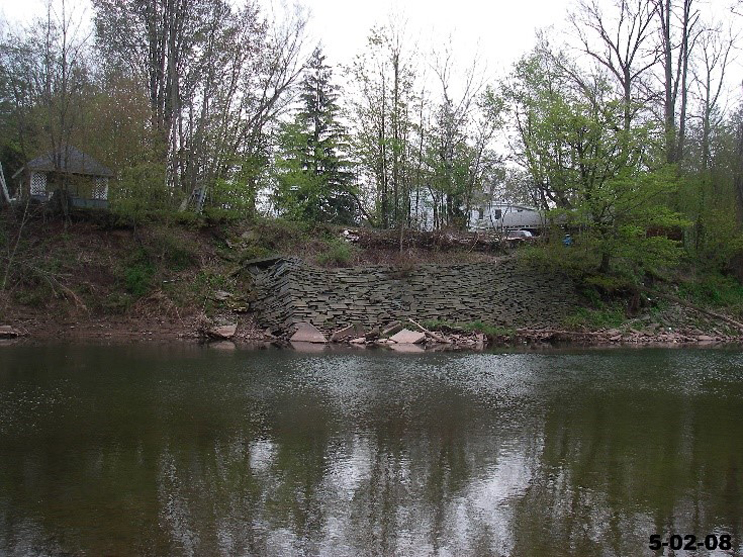 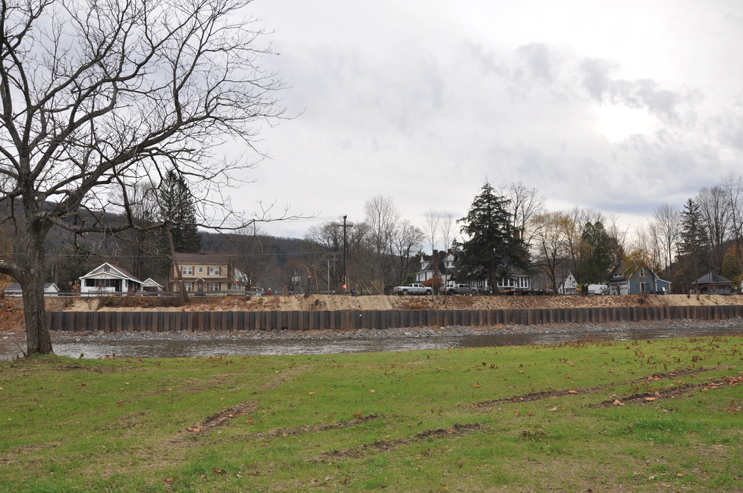 After photo. The West Branch Delaware River and completed South Street Bank Restoration Project in the Town of Walton, as seen from the Walton floodplain. (Credit: JoAnne Castagna, public affairs)

These two streambank management projects have streams that provide water to the Pepacton Reservoir that supplies water to the New York City water supply.

These streams were eroding, causing trees and soil to fall into the water.

To stabilize the streambanks, the slopes along the sides the streams were cleared of the falling trees and debris, and the bottom of the slopes and bed of the stream were reinforced with rock. The bare slopes were then hydro-seeded and planted with willow stakes and native trees.

While the plants are taking root, a thick coconut geo mesh fabric was laid along the banks to protect the growing plants and to prevent soil from running into the streams.

Dutcher said, "The trees will eventually grow full size through the rock reinforcements and will enhance the bank's stability." The plant's roots will stabilize the soil and prevent the soil from running into the river.

While visiting the Hardscrabble project with the Army Corps, Dutcher said, "The stream's water is bubbling as it moves along the streambed's rocks. It looks great. Before, mud was running down the stream." 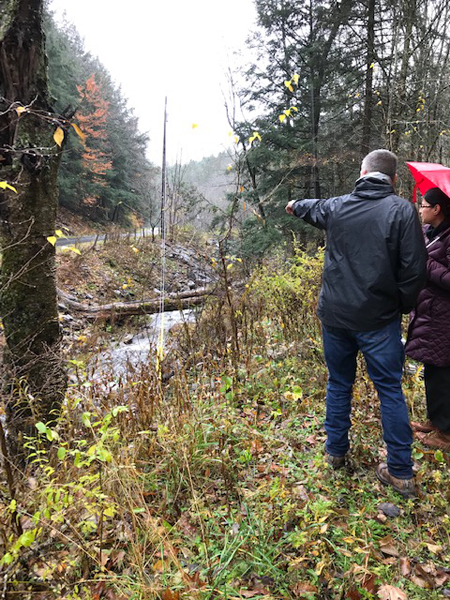 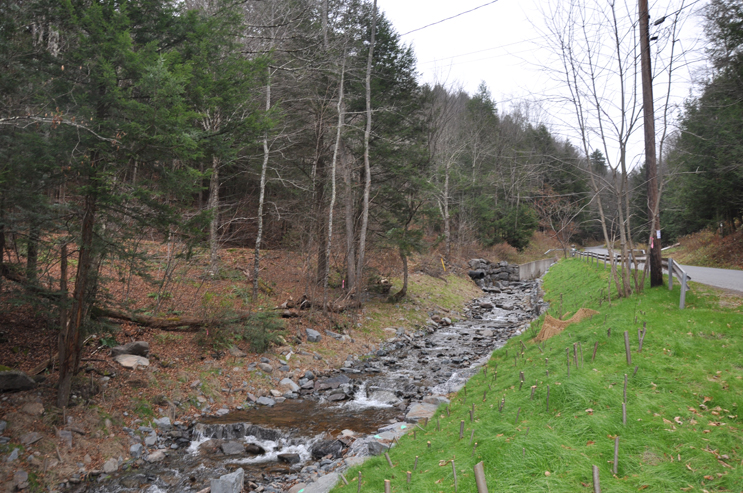 Dr. JoAnne Castagna is a Public Affairs Specialist and Writer for the U.S. Army Corps of Engineers, New York District.  She can be reached at joanne.castagna@usace.army.mil.

The land includes three watershed systems — The Catskill, Delaware, and Croton Systems — that are located in the counties of Greene, Schoharie, Ulster, Sullivan, Westchester, Putnam, Dutchess and Delaware.

A watershed is an area of land that catches rain and snow that drains or seeps into a marsh, stream, river, lake or groundwater.

This water eventually gets stored in reservoirs, a place where water is collected and kept for use when wanted, such as to supply a city.

New York City makes sure that this water is safe by treating it at the source rather than building a costly filtration plant. The source is the land that surrounds the streams, rivers, lakes and reservoirs.

"In 1996, all of the municipalities in the New York City watershed region came to an agreement. They wanted to avoid the creation of a huge filtration plant. Instead of a plant they agreed to have small projects throughout the region to provide the public with clean water with minimal filtration.