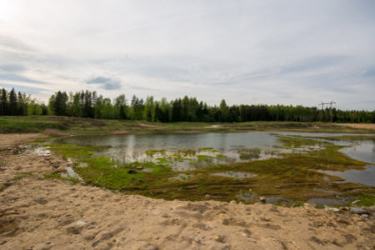 In the northeastern corner of Alberta, nestled among the expanses of forests and wetlands, lies a major freshwater dilemma that Canada is currently facing.

Just down the river from Fort McMurray, massive ponds stretch for miles, filled with toxic water.

For decades, the Canadian oilsands industry has been filling these ponds with wastewater from oil extraction. The purpose of these ponds is to store and reuse water, in order to reduce the amount of new water taken from the nearby Athabasca River.

The reuse of water for oil extraction causes tailings ponds to accumulate higher and higher concentrations of harmful contaminants. As such, the water in these tailings ponds is dangerous, and often lethal, to birds, fish, frogs and plants.

Currently, there is enough sludge-like water to fill half a million Olympic-sized swimming pools — and this volume continues to increase. This huge amount of wastewater has recently prompted Alberta regulators to rethink tailings pond management.

A new policy direction in Alberta allows — for the first time — the controlled release of water from tailings ponds to the environment. Tailings ponds will be eliminated within a certain time frame, reducing the liability of having these toxic waterbodies remain on our landscape indefinitely.

New regulations, which come into effect in 2022, allow oilsands companies to release 1.3 trillion litres of liquid waste into the Athabasca River. These plans, along with the newly loosened regulations for environmental monitoring in Alberta, raise concerns about potential harm to wildlife and people living downstream of oilsands development.

Wastewater from the oilsands must undergo treatment processes before it can be released. Clearly, finding technologies that can safely and efficiently clean up this wastewater is a pressing environmental and human health priority. We tested a promising new technology — titanium dioxide microparticles — that is cost-effective, sustainable and efficient for cleaning up wastewater from the oilsands in Alberta.

Titanium dioxide is a common ingredient in many household products such as toothpaste and sunscreen. When placed on microparticles — tiny round objects made of glass — titanium dioxide can break down organic chemicals in oilsands wastewater. The technology can degrade chemicals with remarkable efficiency: in less than 24 hours during lab tests.

The technology is recyclable and can be used multiple times. The microparticles float on the surface of water, making them easy to collect by skimming the surface water, and then reuse. In addition, the technology uses the energy of the sun, making it a more sustainable option compared to more energy-intensive methods.

Using sunlight energy, the technology creates treatment chemicals, known as radicals, from the water itself. These radicals break down the toxic organic chemicals, theoretically leaving clean water. However, we did not know if the technology reduces the toxicity of oilsands chemicals to living organisms, and so our research team set out to answer this question.

Does it actually work?

The ultimate test of any wastewater treatment is whether the treated products are safe for plants and animals. And so, we tested if titanium dioxide microparticles can “blast apart” toxic organic chemicals in tailings ponds — called naphthenic acids — leaving water clean for fish. First, we diluted naphthenic acids to concentrations that are found in Alberta’s tailings ponds and treated them with titanium dioxide. Then, we exposed fish to these treated and untreated chemicals to see how well the technology worked.

What we found was fascinating. Unsurprisingly, naphthenic acids from oilsands wastewater that received no treatment were highly toxic to fish. When fish eggs were exposed to the untreated naphthenic acids, most of the eggs died before they could hatch.

When the naphthenic acids were treated, however, the immediate lethal effects were almost completely gone. The technology drastically increased survival of fish eggs.

These results are exciting, because they mean the titanium dioxide technology could potentially be used to clean up tailings ponds in Alberta. However, we also found some important information about the technology that must be considered before it can be used practically.

The titanium dioxide technology can be used at different intensities for cleaning the water in tailings ponds. Depending on the level of treatment, different amounts of the toxic chemicals in the wastewater get broken down.

In our tests, it was only when at least 80 per cent of the chemicals were broken down that the treated water was not outright lethal to fish. When naphthenic acids were only partially broken down by the treatment, we actually saw that sublethal effects, like misshapen hearts, may even increase. This means that unless the wastewater is treated thoroughly, it can still be harmful to fish.

So, if this technology is used in Alberta, tailings must be intensively treated, or we run the risk of causing harm to wildlife.

Our research has shown that titanium dioxide microparticles are a promising technology for cleaning up the massive volumes of wastewater in Alberta’s tailings ponds. But more research still needs to be conducted, particularly studies that test the safety of this technology on different species and life stages and on more complex ecological endpoints.

Finally, our research serves as a warning that improper treatment of oilsands wastewater prior to its release to the environment may lead to unintended ecological consequences.

Where do we go from here?

There is no doubt that wastewater produced and stored by the Canadian oilsands industry is a massive and complicated issue. Though it is well established that tailings ponds pose a substantial liability to wildlife and environmental health, we have yet to see much progress in the clean-up process. A new policy direction in Alberta has shifted toward the elimination of tailings ponds, but it is unclear if we have the proper regulations and monitoring programs to execute this elimination safely.

This is not a problem that is going away anytime soon. A substantial, long-term investment — both provincially and federally — must be made in research, regulations and environmental monitoring programs regarding the plan to intentionally release oilsands wastewater if we are serious about remedying the toxic legacy of tailings ponds.