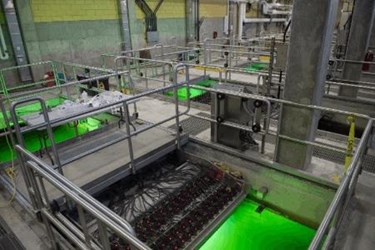 The UV disinfection project at the O'Brien Water Reclamation Plant (WRP) has claimed the ACEC-IL Honor Award, one of the top prizes bestowed by the chapter each year. The UV project was recognized at the ACEC Engineering Excellence Awards Reception and Luncheon on Feb. 9 at the Hilton in Lisle.

"We are excited to be receiving this award, just as excited as we are to improve our waterways through this new technology at the O'Brien Water Reclamation Plant," said MWRD President Mariyana Spyropoulos. "We thank the ACEC Illinois Chapter for the recognition and the men and women who worked so hard to design, construct and maintain this critical facility."

Honor Awards are given to projects that are recognized for "exceptional engineering that meet the needs of the client and benefit the public welfare," according to the ACEC-IL. As one of the nine Honor Award winners, the disinfection facility was also nominated for the Eminent Conceptor, the highest overall award announced at the ACEC-IL awards luncheon. The Eminent Conceptor recognizes an engineering achievement demonstrating a high degree of merit and ingenuity, contributing to the advancement of the private practice of engineering, and enhancing the economic and social welfare of the general public. As an Honor Award recipient, the O'Brien project is also eligible for the National ACEC Engineering Excellence Awards competition.

Last spring, the MWRD introduced UV technology to disinfect water as a final layer to its treatment process to reduce pathogenic bacteria in the water being released from the O'Brien plant into the North Shore Channel. Between recent disinfection upgrades implemented at Calumet WRP on the Far South Side and the latest enhancements at the O'Brien WRP, the MWRD now has a system in place that will dramatically improve the quality of water throughout the Chicago Area Waterway System (CAWS), while protecting the region's drinking water supply in Lake Michigan.

The O'Brien WRP serves more than 1.3 million people within 143 square miles. The $61.7M UV disinfection system is now the largest wastewater treatment UV installation in the world, having the potential to treat 450 million gallons of water per day (mgd), using 896 lamps that provide a low pressure, high output (LPHO) performance. The disinfection technologies neutralize or kill bacteria and microorganisms in treated water and reduce the risk of health problems resulting from direct contact with the water while swimming or recreating on a waterway. Greeley and Hansen served as the design engineering consultant for the project.

"From the kayakers and water taxis, new boat houses and beautiful Riverwalk, we are witnessing a major influx of activity along the Chicago River and other local waterways," said MWRD Commissioner Timothy Bradford. "We believe that the increase in activity is a testament to the impact that this new technology at O'Brien Water Reclamation Plant is already starting to make. The new safeguards put into place at O'Brien will protect our waters for generations to come."The Honor award is the top level award and will be considered for the highest overall award of Eminent Conceptor which is announced at the ACEC-IL Engineering Excellence Awards luncheon that will be held on February 9, 2017. As an honor award recipient, the O'Brien project is also eligible to submit to the National ACEC Engineering Excellence Awards competition.

The Honor Award is the top level award and will be considered for the highest overall award of Eminent Conceptor which is announced at the ACEC-IL Engineering Excellence Awards luncheon that will be held on February 9, 2017. As an Honor Award recipient, the O'Brien project is also eligible for submission to the National ACEC Engineering Excellence Awards competition.

Disinfection occurs after wastewater passes through a series of treatment processes, including screening, filtering, and settling in the primary stage and microbial aeration in the second stage. After going through primary treatment and secondary treatment, water then flows through the disinfection facility via seven channels. Each channel has the capacity to disinfect 75 mgd using the UV light. With two banks of lights per channel and 64 bulbs per bank, there are a total of 896 bulbs installed in the facility, although the bulbs will not all be in use at all times. The lights provide a green glow that emanates through the treated water. Since the UV disinfection system uses light to deactivate the bacteria, the light output is optimized for light in the UV spectrum and not the normal visible white light.

About The Metropolitan Water Reclamation District Of Greater Chicago
Established in 1889, the MWRD is an award-winning, special purpose government agency responsible for wastewater treatment and stormwater management in Cook County, Illinois. For more information, visit www.mwrd.org.