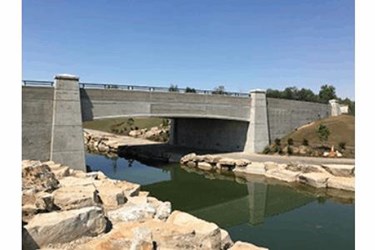 Creating a very distinguishing look for the park’s new vehicular bridge, the arched bridge fascia panels, cast with wood grain finish, were installed three on each side of the bridge and the column pier caps were mounted on top of the bridge columns.

The uniquely crafted, precast concrete, decorative park entrance and directional signage, specifically designed for Ester Simplot Park, is a striking feature of the park. To achieve the complex and highly sculptured form of the signage’s external façade, Oldcastle Precast cast four-inch deep, intricately detailed, block out shapes, for the inset of the stonework. In all, nine decorative signs were produced, seven small signs, 9-foot-tall by 4-foot-long and two large signs, 12-foot-tall by 17-foot-long.

Numerous three-sided bridge segments, supplied by Oldcastle Precast, were used to build a 26-foot-span by 8-foot-rise by three-hundred-twenty-six-foot-long bridge, as a box culvert on the intake structure. The box culvert bridge lies underground, directly after the water intake structure, for park water conveyance and redirection to the river, whereas the precast catch basins and manholes provided, controlled park stormwater drainage.

“Working closely with McMillen-Jacobs, the Oldcastle Precast Nampa, Idaho team delivered the precast concrete park elements on budget and on time to keep the project flowing smoothly,” said Mike Blackham, P.E., Idaho Engineering Manager. “The team worked tirelessly to ensure the high standard of the products, both at the factory and after installation.”

For Oldcastle Precast, the project proved a stimulating challenge and the company was delighted with the result. The fast-track project was carried out with high predictability, reducing dependency on skilled trades while maintaining safety standards. This ensured a high-quality solution providing a benchmark for future schemes of a similar nature.

Funded privately by the J.R. Simplot Foundation, Esther Simplot Park is the newest addition to the “Ribbon of Jewels”, the string of riverside parks named for prominent women in this community. Located north of the Boise River between Fairview Avenue and Veteran’s Parkway, Esther Simplot Park is the largest of the city parks, encompassing 23 acres of ponds, wetlands and other waterways for fishing, wading, and swimming, covering more than 40 percent of the park’s 55 acres. Amenities include bridges, docks, trails, restrooms, boardwalks, natural and paved pathways, shelters, grassy open areas, a playground, and wildlife habitat.

About Oldcastle Precast
Oldcastle Precast is the clear choice for building products and services for North American Infrastructure projects. We are a leading provider of engineered product solutions nationwide to a number of market sectors including:Water, Communications, Energy, and Transportation