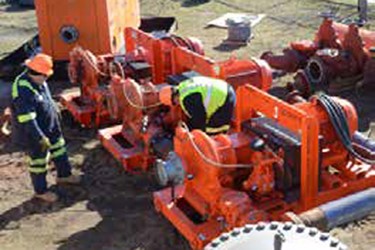 The first sign of trouble in “America’s Hometown” came on December 19, 2015. Plymouth, Massachusetts is the celebrated site where the Pilgrims landed in 1620, but on this day the prominent municipality was facing a major problem: the 4.5mile force main from the Water Street Pump Station to the Plymouth Wastewater Treatment Plant (WWTP) had given way.

“This was a critical emergency,” says Joe Brito, Jr., President of C. Brito Construction Co., Inc. “so we needed to bring in a team that could get it done, and do it right the first time. We called Tom Malone immediately, the New England branch manager at Xylem, who had delivered for us previously. We knew we were in good hands.”

By 5 a.m. the next morning, Malone and his team had assessed the situation and determined that there was degradation and a break of the 30-inch force main, approximately one mile from the WWTP. Little did the team know that the exact same situation would play out twice more along the same stretch of pipe in the next two months, but in every case they responded in the exact same way: with immediate response, nimble thinking, on-site expertise, the right products and finally a comprehensive bypass project to facilitate the replacement of the 4.5 mile stretch of force main.