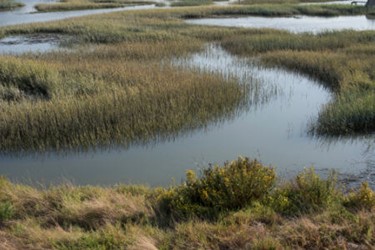 By Hans Paerl, University of North Carolina at Chapel Hill

Tropical cyclones — storms that bring strong, rotating winds and rain, and which can intensify into hurricanes or typhoons — affect coastal regions around the world. Our research team, centered at the University of North Carolina’s Institute of Marine Sciences, has analyzed a 120-year record of tropical cyclones affecting coastal North Carolina, and found that six of the seven wettest storms over this time period occurred in the past two decades.

That trend appeared to continue with Hurricane Dorian, which delivered up to 10 inches (25 centimeters) of rain within 24 hours as it grazed the North and South Carolina coasts in early September 2019. This additional rain is a combined result of a warmer ocean and slower-moving or stalled cyclones approaching the coast.

More frequent and intense tropical storms have far-reaching ecological impacts on coastlines that last for months or years after storms pass. They affect estuaries, bays, and marshes that are crucial nurseries for major ocean fisheries.

Researchers don’t yet know how multiple events like this affect the long-term stability, resiliency, and recovery of these valuable ecosystems. I believe it is critical to understand what these impacts could mean for vitally important water quality and fisheries habitat, recreational value, and livability for local residents and visitors.

Coastal storms have caused widespread damage in recent years. Record rainfalls have been associated with recent cyclones striking the Gulf of Mexico, the Caribbean, eastern China, Korea and Japan, and the southeastern coast of Africa. These storms cause large-scale property damage, human suffering, and economic hardship. Their increasing frequency also has profound effects on estuaries and coastal waters that drain their upstream flood-affected watersheds.

As rainfall from large tropical storms flows from elevated inland regions toward coastal plains, it carries immense quantities of nutrients, dissolved organic matter, sediments, and urban, industrial, and agricultural pollutants. This puts a heavy burden on watersheds and downstream coastal ecosystems that receive these discharges. Many of these coastal areas are already influenced by human activities under normal hydrologic conditions.

When excess nitrogen and phosphorus build up in rivers and bays, they can cause recurring algal blooms with cascading impacts, including oxygen depletion, fish, and shellfish kills and food chain disruptions. There are harmful aesthetic and economic impacts as well, including accumulation of smelly decomposing algae and loss of recreational and fishing habitats. These conditions inconvenience residents and may drive away tourists, harming the local economy.

My colleagues and I have been measuring nutrients discharged to coastal systems for decades, gathering evidence from large storms like Hurricane Floyd, which flooded much of North Carolina’s coastal plain in 1999. We found that a single storm can discharge as much nitrogen to coastal waters as they would receive during an entire hurricane-free year.

Nitrogen in runoff from Floyd led to an outbreak of algal blooms that lasted well over a year in Albemarle-Pamlico Sound, a large, semi-enclosed lagoon that lies between the Outer Banks and North Carolina’s mainland. Albemarle-Pamlico Sound, which covers some 3,000 square miles of open water and drains six rivers, is the second-largest U.S. estuary after the Chesapeake Bay. It supports up to 80 percent of nearshore and offshore recreational and commercial fisheries in the southeastern U.S. and brings in more than US$4 billion in annual tourism revenues and residential income.

There are just four outlets from Albemarle-Pamlico Sound to the Atlantic through the Outer Banks, so it has only limited exchange with the ocean. As a result, stormwater that enters Albemarle-Pamlico Sound from rivers can remain there for about a year before it flows into the ocean. This slow flushing rate allows the system to assimilate and cycle nutrients and organic matter, which creates optimal conditions for multiple algae blooms.

My research group is working to understand how ecologically and economically important water bodies like Albemarle-Pamlico Sound recover from these events. It can take many months or years for these systems to recover from water quality and habitat disruptions in response to flooding from tropical storms.

Over the past four years, Albemarle-Pamlico Sound has experienced three major storms. Each one occurred when the sound’s habitats and water quality were still recovering from the previous event.

A new UN report has confirmed that climate change is having widespread, dramatic effects on the world’s oceans. One impact is that tropical storms are becoming more intense, with increases in rainfall, coastal erosion, and flooding.

In my view, it is extremely important to keep close watch on estuarine and coastal waters that are being affected by the growing frequency and intensity of tropical cyclones and other types of storms, such as nor’easters. I see a need for increased investment in long-term water quality and habitat monitoring around critically important ecological and economic resources like Albemarle-Pamlico Sound.

This will involve coupling “on the ground” monitoring strategies, such as water testing from boats and other platforms, with remote sensing using airplanes and satellites, and with advanced weather forecasting and hindcasting. Using all of these methods will enable scientists to assess the short- and long-term environmental and societal impacts of storms, and to measure recovery and resiliency along coastlines. This kind of information is critical for informing management decisions as more frequent and intense storms batter the world’s coasts.