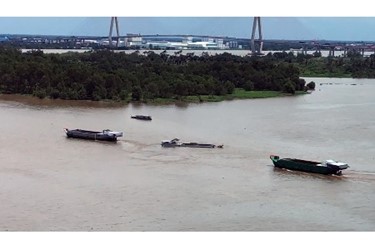 Researchers from Utrecht University have found that increased salt intrusion and tides in the Mekong Delta relate to sediment starvation from upstream dams and sand mining in the delta. The rising tides have major implications for river bank erosion and city flooding in subsiding and progressively vulnerable cities and urban areas. The published research in Scientific Reports shows that sea level rise and climate change are only responsible for a small portion of these trends; the rest are caused by upstream dams and sand mining which have caused two to three meters deepening of the main channels over the last 15 years. The same causal relation between sediment starvation and salt intrusion has been seen in other deltaic areas around the world.

Trapped sediment and immense sand demand
In order to match its CO2 emission targets, China invests heavily in hydropower. Laos intends to become the battery of Asia by investing in hydropower generation as well. And the completion of the controversial Xayaburi dam was followed by various historical low waters all over the lower Mekong basin. It is expected that due to that low water period, significant salt intrusion will occur in the dry season around January to April. Apart from these mainstream dams, there are 350 tributary dams spread over the Mekong basin that not only influence the flow, but also trap sediment.

At the same time, the rapid urbanization of the lower Mekong countries demand immense amounts of sand to support construction of roads, buildings and infrastructure. The research reports four to eight times more sand mining than earlier estimates in the delta. This implies that in Vietnam alone, not accounting for Cambodia and Laos, more sand is mined than is supplied by the Mekong river.

Salt intrusion, deeper riverbeds and rising tides
The recent findings of the Rise and Fall Project at Utrecht University relate rising tides and salt intrusion to sediment starvation from upstream dams and sand mining in the delta. Due to sediment starvation, riverbeds are deeper by two to three meters, the tides are rising by 2 cm per year and salinity has doubled in some channels over the past two decades. The rising tides have major ramifications for city flooding in subsiding and progressively vulnerable cities and river bank erosion in urban areas. The research shows that sea level rise and climate change, in the last two decades, are only responsible for a small portion of these trends. The rest is caused by human intervention.

While climate change poses terminal risks in the coming decades, when addressed wrongly, it vanishes the sense of agency between communities and local governments as it seems ‘too big to solve’. However, if the public understands that the collective actions, locally and regionally, can have ten to twenty times larger impacts, there could be a chance of correctly influencing policy. Considering the detrimental trends identified, it is imperative that the Mekong basin governments converge to effective transboundary management of the natural resources, before irreversible damage is made to the Mekong and its population.