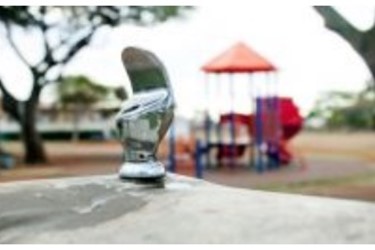 The State Water Resources Control Board confirmed in an email to EWG that 1,166 out of 6,595 schools that submitted test results found at least one fountain that served water with more than 5 parts per billion, or ppb, of lead. Many schools that tested their drinking water did not test all of the drinking water fountains or faucets of potable water.

Although there is no safe level of exposure to lead, the American Academy of Pediatrics recommends that water from fountains in schools not exceed 1 ppb lead.

“One-fifth of all K-12 schools have found at least one faucet on their campus that delivers a dose of lead to the children who use them,” said Susan Little, EWG’s senior advocate for government affairs in California. “These fountains are placed in areas easily reached by children, and many of the fountains haven’t been cleared. Parents should be concerned that their children might be drinking lead during recess.”

California state law requires all K-12 public schools built before 2010 to test their drinking water for lead contamination by today, July 1. The water board reports that as of April 2019, its most recent tally, 6,600 out of approximately 8,200 schools with this requirement have tested their water.

Despite the testing mandate, however, state law and regulation does not specify that schools test all of their fountains and faucets with potable water. California regulations generally require that schools have at least one drinking fountain for every 150 students. For example, a middle school campus with 1,500 students should have at least 10 drinking fountains, as well as other faucets with potable water. Most schools are reporting between one and five tests only, and so are not evaluating all of their drinking water sources.

Lead is a severe neurotoxin that can cause lifelong health damage. Even small amounts of lead can lower a child’s intelligence, cause behavior and learning problems, slow growth, and harm hearing. Because of lead’s neurotoxicity and potential to cause lifelong harm, the American Academy of Pediatrics recommends that water from fountains in schools not exceed 1 ppb lead. The academy recommends that lead be removed from contaminated housing, child care facilities and water served to children.