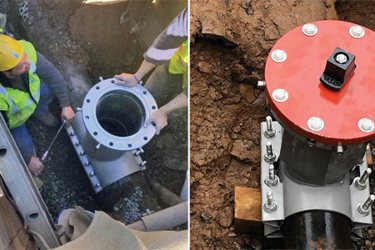 The Problem
MDC is a water utility that serves a densely populated region of Connecticut that also has a significant amount of commercial and industrial facilities. Like so many water utilities within the U.S., MDC has a century-old infrastructure which requires a proactive and preventative maintenance approach.

When developing their maintenance plan, MDC evaluated their existing valves to determine location and condition as well as the impact of shutdown within the area to preform their repairs. Unfortunately, when dealing with an aging infrastructure, many existing valves are inoperable which can cause a shutdown expansion, affecting more customers who are reliant on water.

The Solution
MDC ultimately decided that valve insertion could solve many of their maintenance issues and concerns, and — after thoroughly researching their options — they chose Hydra-Stop’s Insta-Valve line of insertion valve solutions.

With over 40 Insta-Valves installed into their distribution system, MDC has been able to strategically add a control point right where they need it — without the need to shut down during installation. Whether it’s to minimize an affected area during maintenance and repair, or simply installing the Insta-Valve next to an old, inoperable valve to replace it, MDC has been able maintain their distribution system while reducing costs, mitigating risk, and reduce or eliminate service disruption.

"The needs of our customers have changed over the years, and they are more aware of the environment than ever before. At MDC, we provide safe, pure water that our customers trust every time they open their tap and Insta-Valve helps enable us to keep that promise.”

Better Control
MDC was able to achieve targeted control with the Insta-Valve 250 to minimize service disruption during planned maintenance and repair.

Long-Term Value
Every Insta-Valve 250 that has been installed remains a permanent, reusable asset — some of which are replacements for old, inoperable valves.

Cost Reduction
By preventing widespread shutdown, MDC can avoid the costs associated with shutdown, like loss of water revenue.