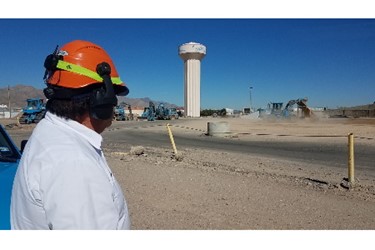 Frank Rittel knew there had to be a safer, more effective way for El Paso Water employees to communicate at work sites other than using hand signals and shouting. The solution came to the utility Heavy Equipment Trainer Supervisor when he watched an episode of the television show “Gold Rush.”

“The operators were using heavy equipment to search for gold, and they used hands-free radio headsets to communicate,” Rittel said. “I saw how effective they were and thought we could use them here at EPWater.”

Division Manager Martin Noriega gave Rittel the green light to explore bringing the technology to EPWater. So Rittel researched various models and called several mining companies who were using the hardhats equipped with noise-cancelling radio headsets. With that information, he purchased one headset to pilot test. Employees have been using the headset during training on the loader, bulldozer and excavator.

“We had five employees who completed the training and tested for a job on the bulldozer,” Rittel said. “All five did better than the outside candidates who didn’t complete the training.”

The next step in the pilot-testing process is to try the headsets out in the field.

“We want a foreman or an experienced crew member to use the headsets to communicate with the operator,” Rittel said. “So when they’re digging around structures, pipelines and overhead power lines, they can communicate to get the work done safely.”

Albert Gonzalez is a heavy equipment operator who helped Rittel test the headsets. He says they are very effective in improving communication around possible blind spots.

“As spotters, we are an extra set of eyes down on the ground,” Gonzalez said. “We can very clearly give the operator instructions. We do it in real time without having to start and stop. I can see using these at big main breaks and big excavations where there’s a lot of distance between the foreman and the operator.”

Once field testing is complete, EPWater will order 16 headsets for use throughout the utility.