The goal of this article is to summarize the process of how industrial discharge limits are established.  These discharge limits (effluent limits) allow the environmental professional to then specify treatment goals and process design criteria.

A point source is any discernible confined and discrete conveyance from which pollutants are or may be discharged.  Examples include pipes, ditches, leachate collection systems, and publicly owned treatment works (POTWs).

The term “waters of the U.S.” (or State) covers a broad range of surface waters and may include hydrologically connected groundwater.  This subject has been the subject of numerous court cases.

Conditions specified in each NPDES permit are typically:

The figure below shows the administration of NPDES programs in U.S. states and territories.  “Fully authorized” means that the federal government (EPA) has delegated complete NPDES control to those states, while  “unauthorized” means EPA maintains NPDES control in those states.  Many states are only “partially authorized.”  Authorized states often rename the program; for example, Montana has a Montana Pollutant Discharge Elimination Program (MPDES). 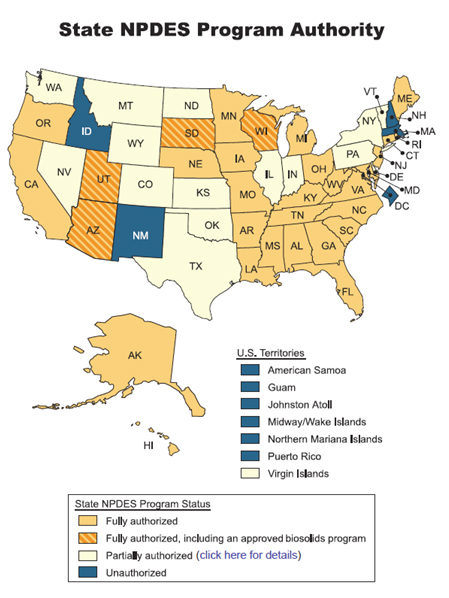 A common source of information is the NPDES Permit Writers’ Manual (EPA, 2010).

A pollutant is defined as “any type of industrial, municipal, or agricultural waste (including heat) discharged into water…”  Common pollutants include:

Permit limits will be the lower of TBELs and WQBELs, plus a margin of safety (MOS).  The MOS is based on variations in treated water quality, the sampling frequency and the specific permit limit statistic (e.g., “maximum daily,” “average monthly,” “acute vs. chronic”).  After permit limits have been determined, the environmental professional will likely include an additional MOS in the goals/design criteria for the water treatment process.

TBELs are the maximum effluent concentrations (e.g., mg/L) and/or pollutant loads (e.g., lbs/day) that may be discharged.  These limits are required regardless of the effect of the discharge on receiving waters, and are based on applying specified levels of technology controls.  An example is best available technology (BAT).

The required elements of water quality standards include:

Water quality criteria are based on four possible user groups:

Most water quality criteria are initially developed by EPA as national criteria.  These criteria are typically adopted by states and tribes, sometimes with modifications.  The criteria are routinely re-evaluated by EPA.

Optional policies to include in developing water quality standards are mixing zones, variances, and critical low flows.  These topics are well covered in the NPDES Permit Writers’ Manual (EPA, 2010).

Various U.S. states term this either “anti-degradation” or “nondegradation.”  It is defined as “Where the quality of the waters exceed levels necessary to support (beneficial uses) … that quality shall be maintained and protected unless … allowing lower water quality is necessary to accommodate important economic or social development in the area in which the waters are located.”

Anti-degradation policy allows the discharge to use only a portion of the “assimilative capacity” of the water, i.e., its capacity to receive pollutants without harmful effects and without damage to aquatic life or humans who consume the water.  The portion allowed depends on the type and strength of the pollutant.  For some pollutants (e.g., carcinogens, bioaccumulators, or persistent contaminants), the portion may be zero.

In the big picture, discharge limits depend on the type of water discharged, uses or processes that the water has undergone, the receiving water, and where, when, and how the discharge occurs.  As an example of an industrial discharge, discharge limits for mine water will be examined.  TBELs can be determined by:

The several types of mine water to consider are:

BPT and BAT include “zero discharge” of water in some cases.  For example, cyanide leach or copper leach process wastewater may not be discharged except for the amount equal to net precipitation at the site.

For more information, contact Mark Reinsel at http://apexengineering.us or Scott Mason at smason@hydrometrics.com.

See part two in the series, "Selecting A Treatment Process".