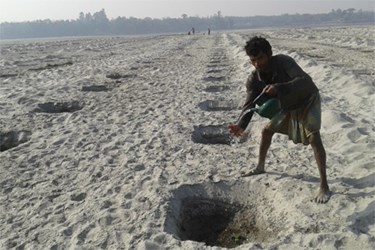 Massive droughts and water demands from a world population projected to grow to nine billion by 2050, translate to food insecurity and lack of water for agriculture. Securing Water for Food sources and invests in a portfolio of innovative solutions that help farmers use water more efficiently and effectively; improve water storage for lean times; and remove salt from water to make more food.

Managed through USAID’s Global Development Lab, Securing Water for Food (SWFF) is one of six Grand Challenges inaugurated by former USAID Administrator Rajiv Shah in 2011 and launched during World Water Week in 2013.

In partnership with the Swedish International Development Corporation Agency (Sida) and the Foreign Ministry of the Kingdom of the Netherlands, SWFF issued its first call for innovators in November of that year.

The Challenge received 520 applications from 92 countries and made awards to sixteen innovators whose ideas ran the gamut from an adaptive, symbiotic fungus for drought tolerance — which has global potential — to flying drones delivering vital crop information to farmers in Mozambique.

“We engineered a highly competitive process supported by an international investment advisory group to source game-changing innovations that have the potential to be financially, socially, and environmentally sustainable over the long term,” notes Lanakila “Ku” McMahan, SWFF team leader. 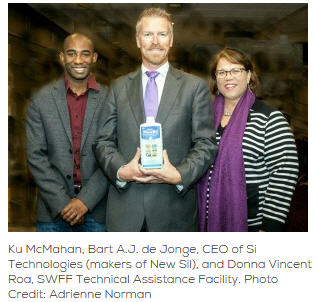 In the first round, the Challenge was not able to fund a solution that converted brackish water for agricultural uses. SWFF’s second call for innovations, which was announced on World Water Day 2014, took the form of a “Desal Prize” to be awarded to the innovator who created a cost-effective, energy efficient, and sustainable small-scale brackish water desalination unit that could provide potable water for humans, as well as water appropriate for livestock and crops in developing countries. Two teams won the award.

“But we hadn’t forgotten about our original focus areas from the first round,” said McMahan. The third call for innovations, which went out in March 2015, “focused on gender and the impact that women could potentially have as farmers, as sellers of these innovations, and as the innovators themselves,” he explains.

“That means treating female farmers as customers just as you would treat male farmers — giving them access to the inputs and technologies and the finances for that.”

The third call yielded more than 400 applications from 67 countries.

“For the third round, we did a better job at putting out the message,” said McMahan. Sixty percent of the winners are from developing countries. “So we consider that a success.”

In early November at International Water Week 2015 in Amsterdam, SWFF announced the 12 awardees of its third call for innovations and revealed that South Africa’s Department of International Relations and Cooperation had become the third SWFF partner.

From a sprayable silicic acid (New Sil) that allows crops to absorb Silicon — helping them grow more food with less water — to a biodegradable polymer wrap that can absorb 100 times its weight in water to help improve agricultural water efficiency — the third round of innovations represent definitively “out-of-the-box” thinking.

Estimates based on the results of the innovations from the first two rounds list the Challenge’s achievements to date as saving more than 500 million liters of water, producing nearly 2,000 tons of food, and serving more than 300,000 farmers and other customers in more than twenty resource-poor countries.

Which begs the question: in the context of three rounds of “game-changing” innovations, how does McMahan define success?

“I would think SWFF is successful if, in five years, 50 percent of our innovators are meeting their targets and their milestones, which leads them to a wider scale success. It’s if we have reached hundreds of thousands, if not millions of farmers with our innovations, and if our innovations have been able to be financially sustainable with more than 50 percent of their funding coming from sustainable sources that are non-donor driven.”

And it’s that last achievement that is the hardest.

While the Challenge awards money that can range from $100,000 to $3 million depending on an innovation’s stage, progress, and degree of scalability, it takes more than money to make one of these innovations scalable and financially sustainable.

USAID’s acceleration support services provide technical assistance to ensure that innovators understand their market, make the best connections in that market, and get the right partnerships, so they can leverage outside funds.

Securing Water for Food is discussing plans to announce a fourth and final call in June 2016 next year. Despite the probability that SWFF will proceed with another round of awards, McMahan views this effort as one that will have to expand beyond SWFF into the policy arena in developing countries.

“We always envisioned this to be something where we address the problem, try to catalyze other people to work on it, have some meaningful success, get some of these innovations to scale, and hopefully have made enough of an impact that others will heed the clarion call as well,” he said.

McMahan is well aware of the enormity of SWFF’s challenge and he worries that SWFF’s innovations might not mitigate the imminent demands of a rapidly changing climate.

“The one thing that I don’t know if we’ll ever be truly successful at, is just getting people to understand the nature of the problem,” he said.

He is talking about having to produce more food with less water, and having a set of technologies and innovations to achieve it. McMahan said that farming practices as they are currently being used in sub-Saharan Africa, South Asia, and even California, are insufficient.

The practices are “not enough to solve this issue, to feed this many more people,” he said, his voice now taking on a tenor of urgency.

“Technology is not the answer. But it is part of the solution.”

“That’s the reason I come to work everyday. I see the coming issues with climate change, and not being able to feed people, and not having enough water both for food and for livelihoods. So unless we really think about and plan in the long term, how we are going to address these issues, we’re not going to be able solve them.”

“And technology is not the answer,” he adds “but it is part of the solution.” He mentions the need for “the right policy environment” — an enabling environment.

“If we don’t at least seed these technologies and help farmers both afford them and use them properly, we’re not going to be able to solve this problem and we’re in a lot of trouble.”

So is the man who nurtures innovation and innovators an optimist or a pessimist?

“I used to say I was a pessimist. And then I became a realist, and then I moved toward optimism,” he said. In the end, he settles on being a “realistic pragmatist.”

“And realistically,” he said, “I think there is a lot of room for hope.”

This article appears in Global Waters, Vol. 7, Issue 1. For past issues of the magazine, please visit Global Waters’ homepage on the USAID website. For more information about the USAID Global Development Lab, click here.