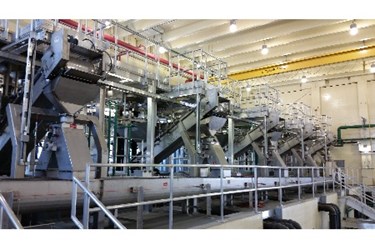 The City of Calgary’s Bonnybrook Wastewater Treatment Plant has installed the largest Advanced Grit Management system ever supplied worldwide by Hydro International to effectively remove large amounts of grit as an essential contribution to operating efficiency.

A complete new headworks facility was needed to treat incoming wastewater and protect downstream processes from grit abrasion and deposition. Hydro International supplied a grit removal solution that could be built in the limited space available and cope with the unique characteristics of the influent at Bonnybrook, including wide variations in flow caused by dry summers and peak winter thaw.

Grit removal is particularly important to Calgary’s wastewater treatment given the city’s climate and topography with a high portion of grit arriving in the raw sewage during spring/early summer storm events.

Consultant engineering firm Stantec was hired to design the new headworks and pre-qualify the suppliers.

“As the removal efficiency of the existing aerated grit tanks was low, and passed on much grit to accumulate in downstream processes, grit characterization had already been assessed by the City in a separate exercise. This was necessary to develop an accurate design basis for a cost-benefit evaluation of the various treatment alternatives considered.”

A grit characterization study was performed to determine plant influent grit gradation and settling velocity as well as a performance evaluation of the existing aerated grit chamber system.

The study found that the existing grit system was removing only 26-29% of the influent grit. The study also identified the reason: virtually all of the influent grit had a settling velocity lower than that of a 212 micron sphere of clean sand, a conventional design point, for which the original grit system was designed. By having the native grit settling velocity, the City and Stantec were able to develop the new system performance requirements and solicit proposals to meet their specific needs.

Hydro International was pre-selected based on its ability to remove grit particles as fine as 75 micron, along with other performance and operational features, together with a proven track record at other regional installations with similar performance requirements.

About Hydro International
Hydro International is a global leader in sustainable technologies for the control and treatment of stormwater and wastewater. For more than 30 years, Hydro has been at the forefront of water industry innovation and product development. From housing developments and municipal sewage works to paper mills and public highways, thousands of Hydro products are operating in countries all over the world. With strong bases in both the United States and the United Kingdom, and a network of partners and agents, Hydro is strategically placed to deliver winning technological solutions to customers wherever they are in the world.