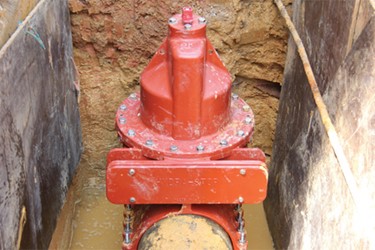 Hydra-Stop’s solution kept the water running in a highly active and populated area while repairs were made.

During a pipe and valve replacement project for a large city in North Carolina, their General Contractor, State Utilities Contractors, started to operate their existing valves around a planned work area but discovered that water was still flowing. It was determined that the cause of the issue was a not fully operational 20-year-old butterfly valve on a 20” ductile iron line.

Shutting down more valves to compensate for their broken one was not an option. A shutdown would disrupt water supplied to hundreds of buildings in the heart of city’s business district, thus affecting hundreds of buildings — including thousands of residents and business customers — while also limiting fire protection, making a large portion of the city vulnerable.