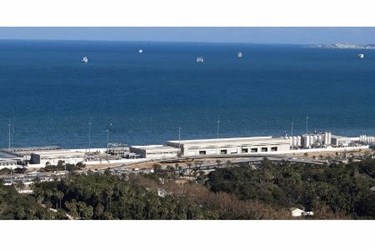 In 2008, Hamma Water Desalination SpA, a special project company combining 70 percent financing from GE and 30 percent from the Algerian Energy Company, was selected to design, build, own and operate the 200,000-cubic-meters-per-day (53 million gallons per day) Hamma Seawater Desalination Plant. It is a reverse osmosis (RO) seawater desalination facility that significantly alleviates water scarcity in Algiers and was the first RO desalination plant in Africa to be funded by public and private investment. GE also was awarded a 25-year contract to operate and maintain the plant.

“We are honored that the Hamma Seawater Desalination Plant received the OPIC Impact Award for critical infrastructure,” said Kevin Cassidy, global leader, engineered systems—water and process technologies for GE Power. “GE is fortunate to have been part of this project from the very beginning, and our water treatment operational capabilities allow us to take a hands-on role in providing a sustainable source of fresh water for 1.5 million residents.”

“The Hamma Seawater Desalination Plant is critical to the people of our country. Drought and extreme high demand for water forced our residents and businesses into frequent water rationing. The plant now provides a simple and economic solution that guarantees ongoing access to fresh water for Algerians. We thank OPIC for recognizing us, GE and our facility with this prestigious award,” said Ahcene Ouzane, general manager, Algerian Energy Company.

Mark Klaiber, general manager, engineered systems services—water and process technologies for GE Power, accepted the OPIC Impact Award at a ceremony at the U.S. Chamber of Commerce in Washington, D.C., on July 7, 2016.

The OPIC Impact Awards, now in its third year, recognize the important work OPIC partners are doing to advance development in emerging markets around the world. Impact Award winners are selected through a rigorous process that considers multiple factors including:

There is an open nomination process from all OPIC staff to submit projects that are in OPIC’s active portfolio or have recently paid off their loan in full. Each project is carefully reviewed under the above criteria, and final winners are selected from a committee composed of senior leadership.

About Algerian Energy Company Spa
Algerian Energy Company (AEC) is a joint-venture owned equally by Sonatrach and Sonelgaz, responsible for the promotion of strategic scale with national and international partnerships in the energy sector. AEC is responsible for 13 seawater desalination stations including 11 in operation to achieve the capacity of 2.1 million m3/day, and the acquisition of interests in three power plants with 2,375 Mwh in scope.

About GE
GE is the world’s Digital Industrial Company, transforming industry with software-defined machines and solutions that are connected, responsive and predictive. GE is organized around a global exchange of knowledge, the "GE Store," through which each business shares and accesses the same technology, markets, structure and intellect. Each invention further fuels innovation and application across our industrial sectors. With people, services, technology and scale, GE delivers better outcomes for customers by speaking the language of industry. For more information, visit www.ge.com

About GE Power
GE Power is a world leader in power generation with deep domain expertise to help customers deliver electricity from a wide spectrum of fuel sources. We are transforming the electricity industry with the digital power plant, the world’s largest and most efficient gas turbine, full balance of plant, upgrade and service solutions as well as our data-leveraging software. Our innovative technologies and digital offerings help make power more affordable, reliable, accessible and sustainable. For more information, visit www.gepower.com.