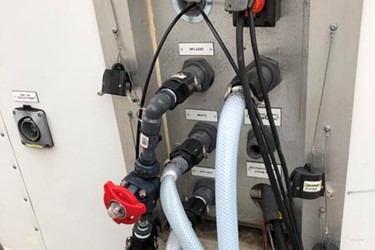 Iron, manganese, arsenic and hydrogen sulfide are indigenous to numerous groundwater aquifers. With the exception of arsenic, these constituents are more prevalent in deeper aquifers that are devoid of dissolved oxygen. This report summarizes the results and conclusions of a groundwater treatment pilot test program. This pilot test program was undertaken to determine the removal performance for arsenic, manganese and iron at the City of Merced’s Well 20 site. Chemical treatment processes required were also studied.

The pilot study was conducted in three runs for each of the three medias. Since the contaminant level was low, with only manganese slightly above the MCL limits, the first run was conducted near the maximum industry standard treatment rate of iron, manganese and arsenic removal. Run 2 was conducted at the same rate as Run 1 to confirm repeatable results. Ferric Chloride was added as a coagulant in Run 3 to observe results on arsenic reduction in case future conditions required it.