Groundwater Information Is No Longer Out Of Depth 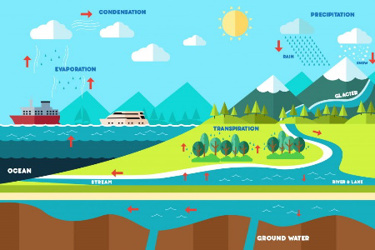 A UConn Ph.D. candidate and a faculty member have developed a novel way of gathering data about streams fed by groundwater that provide important insights about the possible effects of climate change.

Water is constantly on the move: through the air, through waterways, and underground. Life depends on a consistent supply of water and details about its journey are necessary for understanding and managing this dynamic resource.

However, those details are often difficult to measure. UConn Ph.D. candidate Danielle Hare, in the lab of associate professor of Natural Resources and the Environment Ashley Helton, has expanded on a novel method to easily access vital details about groundwater, and in doing so, they have discovered that many streams are more vulnerable to stressors like climate change than previously thought. The team has published their findings in the latest issue of Nature Communications.

Precipitation enters streams and rivers by flowing over land surfaces, or it percolates through soil into the groundwater. Groundwater then flows back into waterways, but understanding the details, such as the depth of groundwater entering streams, is more challenging.

“Normally, you’d have to go to a site and spend a lot of time and money just to figure out the source of groundwater discharging to the stream,” she says.

These details are important for watershed managers, who take into account numerous variables to keep water clean and safe, both for drinking water and for wildlife habitats.

Helton explains some of the roles groundwater plays for streams and groundwater-dependent ecosystems.

In the case of streams with significant groundwater inputs, Helton says management often defaults to assuming that groundwater-dependent streams are managed similarly. Hare, with a strong interest in stream temperatures and groundwater dynamics, sought to explore if this was truly the case as part of a class project.

“This project was open-ended and it was a great opportunity to combine my interests. We were not sure if it would work, but even if it didn’t, I knew I would learn along the way,” says Hare.

Hare used data that is frequently gathered and often publicly accessible: stream and air temperature measurement. These data are paired at over 1,700 streams nationwide, and the researchers were able to deduce which streams had substantial groundwater inputs and, of those, which were deep or shallow groundwater-fed. The findings were eye-opening.

“Something that surprised me was just how prominent shallow groundwater sites are across the US. We saw about 40% of the sites had substantial groundwater component, and how many of those were shallow were about 50%. I would not have guessed that; I would have guessed that there were more deep groundwater,” says Hare.

The researchers were excited that what started as a course project for Hare has turned into such a powerful tool.

“This method is straightforward and accessible to watershed managers and stakeholders. There is a lot of power to that. There is no need to spend a lot money to define different geology, we can simply use a temperature logger or thermometer to monitor the temperatures. They are widely available and straightforward,” says Hare.

Hare and Helton are hopeful this information will be considered in making watershed management decisions going forward.

“The sites that are dominated by groundwater are really wide spread and about half were shallow,” says Helton. However, this could be problematic when sites are managed as if they are deep groundwater-fed sites. Hare cautions that managers could be missing out on important conservation opportunities in the face of challenges that can impact groundwater replenishment.

“The streams that are shallow are not going to be buffered as well as we previously thought,” says Hare. “Especially when considering the groundwater dependent ecosystems, when we’re thinking about fishes that we really do need to consider or else we may have a missed opportunity as far as mitigating, supporting, observing that important ecosystem resource.”

For those tasked with managing these important watersheds, this new method ensures vital information is no longer out of reach, says Hare.

“Where the power is in this study and what makes it distinct is we separate the shallow versus deep components of groundwater. Not only are we able to find streams that are more groundwater-dominated, we can parse that information into whether it is groundwater shallow or deep. The shallow are going to be more susceptible to both climate warming and development changes.”