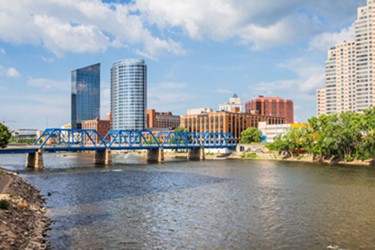 Grand Rapids, MI is a community that has garnered accolades in the clean water industry for taking significant proactive steps to improve its sewer system. In the early 1990s, “River City” took the initiative to invest in transforming its collection system from a combined sewer system to separate storm and sanitary sewers. By moving from a single pipe for both stormwater and wastewater conveyance to separate pipes, the City avoided the introduction of sewage into its waterways, reducing overflows and subsequent pollution into the landmark Grand River that flows to Lake Michigan 40 miles downstream.

After nearly 25 years, Grand Rapids finished retrofitting its combined sewer overflow system to a separate sanitary and stormwater system, completing its long-term control plan (LTCP) in 2015. But now, the City needed to get a better understanding of the infiltration and inflow into these newly separated sanitary sewers to ensure compliance with a mandate from the Michigan Department of Environmental Quality (DEQ). This mandate allowed them zero overflow events of any kind, except as part of a wet weather event of a magnitude in excess of a 24-hour, 25-year storm.